By Mary Hightower
U of A System Division of Agriculture
Sept. 30, 2016

LITTLE ROCK – Crape myrtle bark scale, a pest confirmed in Arkansas just two years ago, is easy to spot, but hard to control, according to extension experts with the University of Arkansas System Division of Agriculture. 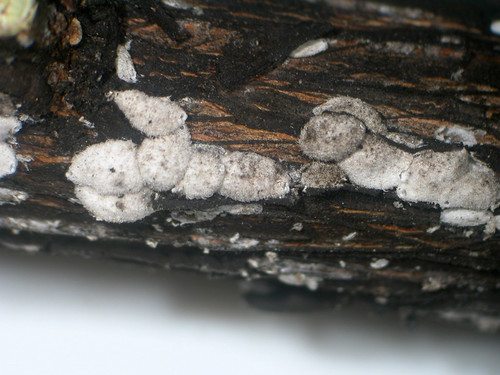 The tiny pest, believed to have originated in Asia, was first found in the United States north of Dallas in 2004. Ten years later, it was confirmed in Little Rock.

The crape myrtle bark scale insect lives off plant sap. In large enough numbers, they can cause branch and twig die back.

“The most problematic thing done by these insects is that they produce copious amounts of honeydew,” said John Hopkins, extension entomologist for the Division of Agriculture. “The honeydew supports black, sooty mold, which covers foliage and bark, ruining the aesthetic value of the crape myrtle, until the infestation is brought under control.”

“Crape myrtle bark scale is easy to identify since it’s the first and only known bark scale to occur on crape myrtles in the United States,” Hopkins said. “Adult females appear as white or gray felt-like encrustations on small twigs to large trunks, often appearing near pruning wounds or in branch crotches on older wood.”

Researchers are evaluating control options for these insects.

“Based on our limited experience with this pest, it appears that it can be controlled with systemic neonicotinoid insecticides,” Hopkins said. “However, if there’s a heavy infestation — if the leaves are already covered with honeydew and black sooty mold is growing, it will be the following year before defoliage comes on. But it will come back.”

Lady beetles and other natural enemies of the bark scale have shown some problems with holding the pest in check, especially when the beetles’ population level is low.

For more information, contact your county extension office or download a fact sheet about the insect at https://www.uaex.uada.edu/publications/pdf/fsa-7086.pdf.

For more information about integrated pest control, horticulture and other programs of the University of Arkansas Cooperative Extension Service, contact your county extension office or visit www.uaex.uada.edu. Please note that many links to extension publications will be changing this spring as the extension service renovates its site.