TRUMANN, Ark. – For the second time in as many weeks, a state record has fallen in Arkansas’ Grow for the Green Soybean Yield Challenge, said Jeremy Ross, extension soybean agronomist for the University of Arkansas System Division of Agriculture.

“I just confirmed a field in Poinsett County at 118.8 bushels per acre – a new state record,” Ross said on Tuesday.

That field, and the current record, belongs to James Wray, who was growing Pioneer 47T36. His yield came painfully close to the 120-bushels-per-acre-by-2020 goal laid out in the Grow for the Green soybean yield challenge. At stake is a $10,000 incentive for the grower or growers who hit 120. 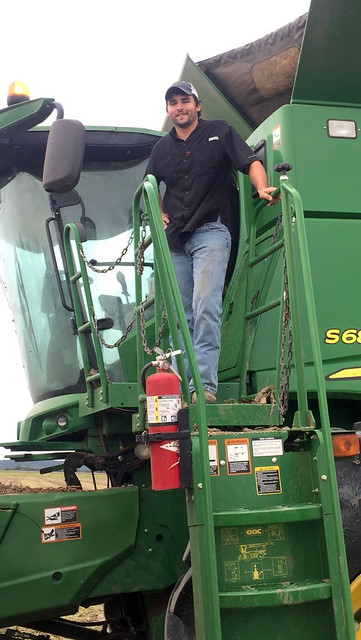 ONE FOR THE RECORD BOOK — James Wray of Trumann holds the current Grow for the Green Soybean Challenge Yield record at 118.8 bushels per acre. Taken Sept. 27, 2016. (U of A Division of Agriculture image by Craig Allen.).

The previous record was held by Martin Henry of Desha County – for a week. He was certified having harvested a plot of 113.888 bushels per acre of Armor 48D24. Henry planted his soybeans on April 5 and harvested on September 16.

Ross said Wray’s yield was initially pegged at 120.002, but when a percentage for foreign matter was subtracted, he wound up a shade under 119.

Talking from his combine on Tuesday, Wray said he was disappointed to have missed the deadline to enter last year’s contest. However, the field he would’ve entered yielded better than 97 bushels per acre – enough to give him that 100-bushel fever.

This year, he said he felt blessed and quoting from Corinthians, adding, “I do what I can and leave the rest up to Him,” Wray said.

"Wray is so energetic and it's fun to work with him and his family," said Craig Allen, Poinsett County extension staff chair for the Division of Agriculture. "They're so involved in every aspect of what they can do to make the best yield they can grow."

"It's great to see a young farmer coming in and being this goal-oriented. His goal this year was to hit 100 and next year, it was to hit 120," Allen said. "His 118.8-bushel field was literally five bushels away from being 120."

Wray said the family has a third field entered, which will likely be harvested this week or next. Eyes will also be on Matt and Sherrie Kay Miles of McGehee, who have yet to harvest their challenge field. The Mileses were the first to achieve 100-bushel yields in consecutive years.

Joining the century club in 2016 are Wray’s father, Eddie, also of Poinsett County. The elder Wray also planted Pioneer 47T36 on April 9, harvested September 16 and had a yield of 109.701 bushels per acre. Michael Taylor Jr. of Phillips County planted Asgrow 47X6 on April 8, harvested on Sept. 15 and reported a yield of 101.319 bushels per acre. Chicot County’s Layne Miles clocked in with a 100.94 bushel per acre effort, using NK S47K5 soybeans.

“I’m a little surprised that we have had five fields so far break the 100-bushel-an-acre mark,” Ross said. “I didn’t think we would see these numbers this year with the hot, dry weather pattern we saw during June and July, and then the wet, cloudy conditions we had during the first of August.”

The Grow for the Green contest is funded by the Arkansas Soybean Promotion Board using producer checkoff funds and is managed by the Arkansas Soybean Association. The University of Arkansas System Division of Agriculture is a major component of the contest by providing information to producers and serving as judges. The contest fields consist of five to seven acres and must have been planted in soybeans at least once in the previous three years.

“Many of the reports I have been receiving from other producers is that the soybean crop is off a little from previous years,” he said. “Some of the early planted acreage has had smaller seed size than previous years, and the quality in some of these fields is poor.”

The 100-bushel-per-acre yield mark was first broken in Arkansas in 2013 by Nelson Crow of Dumas. Soon after, century mark yields were certified for Eddie Tackett of Atkins and Matt Miles. The following year, David Bennett of Lake Village joined the 100-bushel club. The Mileses achieved their century marks in both 2013 and 2014, and Matt Miles scored 100-plus again in 2015. Brothers Perry and Charles Galloway were also added to the 100-bushel club in 2015. (See: http://www.arkansassoybean.com/2015_revised_booklet.pdf)

Arkansas soybean growers planted 3.15 million acres this year. According to Monday’s Crop Report from the National Agricultural Statistics Service, 32 percent of the state’s soybeans have been harvests.

The University of Arkansas System Division of Agriculture offers all its Extension and Research programs to all eligible persons regardless of race, color, sex, gender identity, sexual orientation, national origin, religion, age, disability, marital or veteran status, genetic information, or any other legally protected status, and is an Affirmative Action/Equal Opportunity Employer.