By Fred Miller
U of A System Division of Agriculture
Sept. 23, 2016 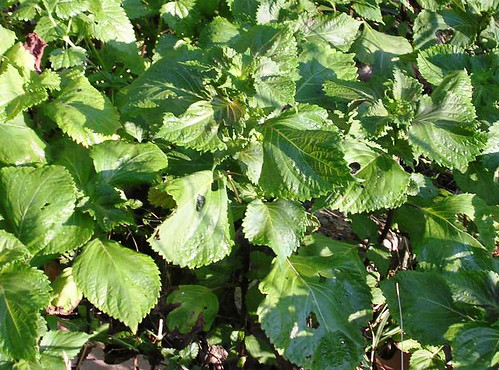 Kurz said perilla mint poisoning is suspected in several cattle deaths and has been confirmed in at least seven, including five reported by one producer last week.

“In rainy summers like we’ve had this year, perilla mint tends to spread out into the pastures, where it becomes more accessible to cattle,” Jennings said.

Cattle usually find the weed unpalatable and avoid it, Jennings said. “They’ll even sort around it when it’s bound up in hay,” he said, though he noted that some animal deaths from eating perilla mint in hay were reported last year.

But when forage grasses become scarce, as when over-grazed or during drought, cattle will sometimes graze on perilla mint, Jennings said. Some cattle also have been reported eating the weed when it begins to wither, as during drought or when sprayed with herbicide.

How do I control perilla mint in my pasture?

Jennings said good general weed control is important, especially early in the season when plants are small, to protect cattle from perilla mint and other toxic weeds common in the state.

Herbicide applications and bush-hogging can be used to clear toxic weeds from pastures, but Jennings cautions to keep cattle out of the field until the weeds are completely dead and fully withered.

Other weeds in Arkansas that are toxic to grazing cattle include:

What are the symptoms of perilla mint poisoning?

This weed is highly toxic to cattle and causes emphysema-like symptoms which may be fatal. Signs of illness develop within 24 hours of consumption of perilla mint. Severely poisoned animals have loud, open-mouth breathing. A grunt may be heard as the animal labors to exhale air from its distended, emphysematous lungs. Animals that survive for 48 hours are expected to recover. Horses may also be affected but rarely eat a toxic amount.

If you suspect your animal has been poisoned contact a veterinarian immediately.