By Ryan McGeeney
U of A System Division of Agriculture
Sept. 14, 2016

(Newsrooms: With harvest imagery at https://flic.kr/s/aHskGFNfTq) 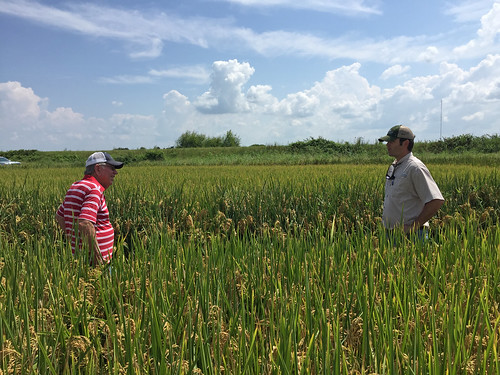 Between August and September, the NASS forecast for corn production dropped by about 3.7 million bushels to approximately 135.2 million. The yield-per-acre estimate dropped from 189 to 184. The total acreage of corn planted in Arkansas increased dramatically over that planted in 2015, however, from 445,000 acres to 735,000 acres, so the state’s overall contribution to the corn market will still likely represent a tremendous year-over-year increase.

Grain sorghum in Arkansas dropped off significantly between 2015 and 2016, from 440,000 acres to 37,000 acres; NASS further reduced the state’s production forecast by 270,000 bushels from August estimates to about 2.9 million bushels.

Jarrod Hardke, extension rice agronomist for the University of Arkansas System Division of Agriculture, said he expected the monthly forecast estimates to continue to drop from month to month, as rice growers in the northern half of the state continue their harvests, and producers come to fully grasp the long-term effects of the summer rain and flooding.

“Right now, we’ve harvested about 52 percent of the planted rice in the state,” Hardke said. “And that’s way ahead of the five-year average of 34 percent, which is about how much we’ve typically harvested by this point in the season.

“Based on what I’ve seen, the estimates will continue to drop,” he said. “They’re still harvesting some of the hardest-hit areas in the north of the state, where about two-thirds of our rice is planted.”

Last week, the Division of Agriculture published a report that estimated Arkansas growers will suffer about $46.4 million in crop losses, primarily due to heavy rains throughout August. The greatest portion of those losses is expected to be felt in rice, at about $18.6 million. The report can be read at http://bit.ly/2016ArkCropRain.