U of A System Div of Ag pegs flood, rain-caused row crop losses at $40-$50 million

FAYETTEVILLE, Ark. – Heavy, sustained rainfall in August may cost Arkansas row crop farmers $40-50 million, according to a preliminary estimate released Thursday by the University of Arkansas System Division of Agriculture.

“In a state where agriculture contributes more than $20 billion a year, this is no small loss,” said Mark Cochran, vice president-agriculture, and head of the University of Arkansas System Division of Agriculture. “It’s certainly not a small loss to families whose farms are the main source of income.

“While that figure is large, we need to remember it’s still only a preliminary number and the ultimate figures won’t be known until harvest is over, and these numbers could be higher, especially when quality discounts and impacts on the specialty crop industry are better known,” he said.

Cochran said the Division of Agriculture, with its network for state crop specialists, county agents and its economics team, is in a unique position to quickly assess these types of damage.

Authors Eric Wailes, distinguished professor and L.C. Carter chair in the agricultural economics and agribusiness; and Brad Watkins professor and extension economist, warned that “at this stage it is difficult to gauge the impact of quality deterioration and need for segregating damaged crops to avoid contamination of non-damaged harvest. 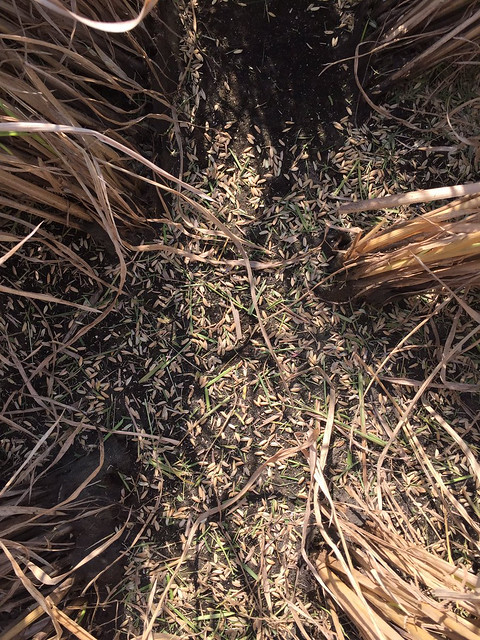 FALLEN -- Dropped kernels of rice. Image taken Sept. 2, 2016. (U of A System Division of Agriculture image by Jarrod Hardke)

“Finally, this estimate does not include the damage incurred on small and large vegetable and melon farms,” the authors said. “In this light a more reasonable estimate of damage is likely to be $50 million and that may ultimately prove to be a conservative value.”

The Aug. 13-20 rain dropped up to a foot of water, submerging more than 30,000 soybean acres in a five-county area of northeastern Arkansas at a critical time in the crop’s reproductive cycle. The loss for this acreage is estimated at $10.75 million. Lawrence County, at 12,000 acres, and Randolph County at 8,000 acres, saw the largest areas of flooding in beans. In all five counties, it’s estimated that flooding destroyed 75 percent of farmers’ soybeans on flood-affected acres. Farmers across the state planted 3.15 million acres of soybeans.

By the time the rain hit, harvest in the state’s 1.58 million rice acres had only reached 2 percent. Northeastern Arkansas saw the heaviest rain, with totals up to 12 inches. Hardke estimated 40,000 rice acres were hard-hit, with the largest amounts in Randolph 15,000 acres; and Craighead counties at 10,000 acres. Total losses for rice were estimated at up to $18.6 million. Arkansas is the nation’s leading rice producer, growing more than half the crop.

The sustained rainfall had a different impact on grain sorghum. Flooding wasn’t the issue, but humidity was. The rain fell when grain sorghum planted in April and early May was mature enough for harvest. Combined with warm temperatures, the sorghum quality deteriorated as the grain began sprouting in the head. Kelley estimated that 80 percent of the state’s 40,000 acres of sorghum were planted during that time. Losses due to lower quality grain are estimated at $5.6 million.

Compared to other row crops, corn was less affected and the authors did not include a dollar figure damage estimate. However, Kelley noted that some corn was sprouting on the cobs, with a minor increase in stalk rot and lodging, or leaning, was noted coming into harvest. Corn acreage was clocked at 750,000 this year.

The weather caused different problems for cotton growers. The cloud cover diminished the plants’ ability to produce the energy they needed to keep the bolls, causing the bolls to fall off, or shed. The humidity also made cotton fields a playground for target spot and other diseases.

The authors said that losses could be as high as $11.5 million, but also note that there is great uncertainty over the assessment of damage.

However, “there are still reasons to be optimistic about this crop,” Robertson said. While there was high rate of loss in cotton planted in late March and early April – 70 percent – cotton planted in that window makes up only 1 percent of the total Arkansas crop.

“It is expected the August rainfall will not damage the later planted cotton, which makes up about 20 percent of the state’s acres,” he said. Statewide cotton acreage rebounded to 370,000 acres from last year’s 210,000 acres.

“Much of the crop was planted in Mississippi County on well-drained soil,” Faske said. “As a result, damage from excessive August rainfall is expected to be minor.”

The output of small and specialty crop producers who provide to grocery stores and other local markets is not well documented and no estimates could be provided by the authors, However, “one producer reported a complete loss of 500 acres of cantaloupes with a market value of $1.5 million,” the study said.

For more information on crop production, contact your county extension office or visit www.uaex.uada.edu or http://Arkansascrops.com.