(617 words)
FAYETTEVILLE, Ark. — A high-yielding wheat released by the University of Arkansas System Division of Agriculture is now available to growers. 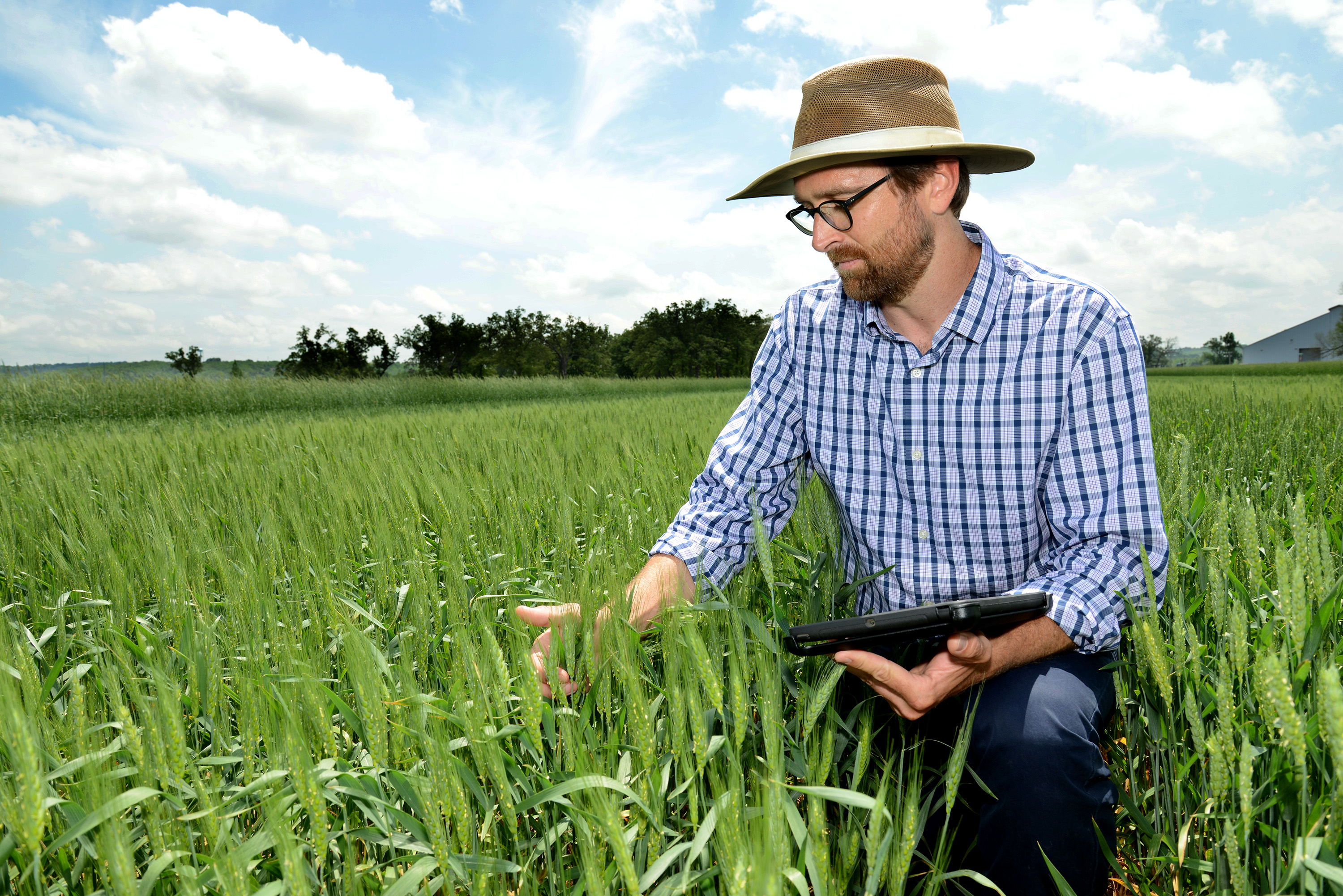 CHECKING -- Dr. Esten Mason records growth, health and other data from a wheat verification plot. (U of A System Division of Agriculture photo by Fred Miller)

Mason said AGS 2055 averaged 86 bushels per acre over three years of performance trials at several test sites around the state. In the 2016 harvest, the most recent test results, it averaged 79 bushels per acre in four locations.

It is also resistant to stripe rust, leaf rust and local races of stem rust, according to data in the release proposal. It also shows moderate resistance to other economically important diseases and pests present in the South.

“This is a wheat that performs well from the Arkansas River valley, to southeast Arkansas to northeast Arkansas,” Mason said. It also does well in neighboring states.

Mason said high yields are important to Arkansas growers who are trying to make a profit with minimal inputs.

In Arkansas, Mason said, wheat growers need to make around 70 bushels an acre just to break even. This year’s harvest averaged about 53 bushels per acre, he said.

Mason said AGS 2055 was developed from a breeding line that originated in the University of Georgia breeding program.

The University of Arkansas System Division of Agriculture is part of Sungrains, a breeding cooperative of six public university programs, including Georgia. Each institution shares breeding lines with the others for evaluation.

Sometimes, a breeding line that doesn’t merit advancement in its home state will do well in one of the cooperating states, Mason said, and that’s what happened in this case.

The breeding line from which AGS2055 was derived was advanced toward release as a variety by testing it in regional performance nurseries and Arkansas trials from 2010 to 2015.

In addition to Arkansas, AGS2055 showed excellent performance in neighboring states, especially in Texas. Mason said the variety was ranked near the top in the Uniform Southern Soft Red Winter Wheat Nursery with and average of 75 bushels per acre across 16 sites located around the region.

Mason encourages farmers to look at all the data on AGS 2055 and compare it to other available varieties. The information is available online from the Division of Agriculture:

The Division of Agriculture’s Arkansas Foundation Seed Program at Stuttgart produced and distributed foundation seed for AGS 2055. The variety is licensed to AgSouth Genetics and available in Arkansas through Stuttgart-based Stratton Seed.