LITTLE ROCK — When its time to wean a calf from its mother, it can be a stressful situation for all involved — including the rancher. But some techniques make for a gentler road than others, according to University of Arkansas System Division of Agriculture associate professor of forages Dirk Philipp. 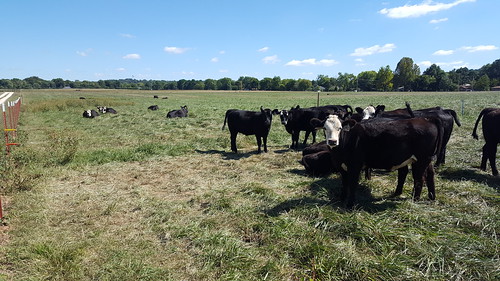 “Weaning puts stress on both the mother cow and calf if weaning is handled to abruptly,” Philipp said. “But there’s a simple way for minimizing weaning stress, called ‘fenceline’ weaning, which basically means that during the weaning process, there is a fenceline between the mother cows and calves.”

The technique offers several advantages, Philipp said, including allowing cows to maintain audio-visual and olfactory contact with their calves, which greatly reduces stress, and typically results in less “bawling” from both cows and calves.

“The weaning process itself takes about five to seven days, with about three days for cows to adjust and reduce milk production,” Philipp said. “It may take one to two weeks for the animals to become fully accustomed to the new situation.”

Keeping calves beyond weaning is also economically advantageous, Philipp said. In a demonstration project at the U of A Batesville research station, calves returned an extra $66 per head for the additional 60 days of retained ownership and grazing, thereby putting on extra weight before sale.

“Depending on the season, select a pasture that has enough forage to hold cows and calves for a couple of weeks,” he said. “Stockpiled fescue works well in the fall — preferably novel-endophyte or non-toxic fescue.

“Move the cow-calf pairs into the working facility and separate cows from calves,” he said. “This is a good opportunity to check pregnancies, calf weight and so on.”

Philipp said producers should set up a double-wire electric (polywire) fence so that the double strands are just below the head of the calf. If the calf pushes, it will learn to avoid the fence wires, he said.

Producers should use posts that make it easy to put the wire back in place when animals topple them — this sort of fence can easily be a cross-fence in a larger pasture or paddock. The wires should carry enough charge to deter animals from crossing over. The wire can be hooked up to the electric perimeter fence or hooked up to a portable charger.

After cows and calves are separated to their respective sides of the fence, they may each periodically bawl, but this will only take place during certain times during the first days of the weaning process, and should be short-lived, Philipp said.