By Ryan McGeeney
U of A System Division of Agriculture
Oct. 14, 2016

LAWRENCE COUNTY, ARK. — As Mike Andrews and Herb Ginn, agricultural agents for the Randolph and Lawrence County Cooperative Extension Service offices, respectively, clawed their way through bundles of harvested peanuts Wednesday morning, they admitted the work was not especially easy. 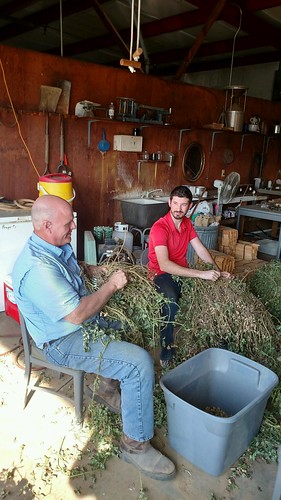 “You’re welcome to give it a shot,” Ginn laughed. “We won’t even charge you for the experience.”

The two agents, along with a member of the Natural Resources Conservation Service were elbow deep in harvesting peanuts from a gypsum and irrigation peanut demonstration plot in Randolph County, research projects now both in their second year, designed to identify best management practices in irrigation, fertilization and other aspects key to successful peanut growing in Arkansas.

Gypsum use in other peanut growing states has shown to positively influence yield and grade of peanuts as shown by research, Andrews said.

“Hopefully through the gypsum demonstrations we can gain valuable information that will help our producers improve their bottom line,” he said.

As with many crops, successfully growing peanuts requires a high-wire balancing act between too little moisture and too much. While peanuts aren’t as susceptible to weather events as perhaps rice or corn, the plants must receive enough water to induce the plants to send “pegs” into the soil where the peanut itself develops, but not so much that the soil saturates and hosts disease.

“They’re not a heavy user of irrigation like rice or corn,” Andrews said. “They just need timely moisture so that the plant will bloom and send a peg down into the soil, where the peanut is formed. If we don’t have moisture, a lot of times the pegs don’t survive, and it affects the number of peanuts. Since the peanuts are grown underground, a lot of water will cause pod rot on the peanuts — we’re seeing more of that this year.”

Christopher Henry, an assistant professor and water management engineer for the University of Arkansas System Division of Agriculture, said most peanuts throughout the world are irrigated using center-pivot sprinkler irrigation; Arkansas and Georgia are the rare exceptions.

“People growing peanuts in Arkansas don’t have center pivots, and they’re not going to convert to center-pivot irrigation,” Henry said. “They’re growing rice, corn, cotton and other crops — so they either furrow irrigate them, or they grow something else. And they want to grow peanuts into the rotation.”

Henry said that although Arkansas has only recently come to be thought of as a major peanut-producing state, major peanut buyers including Bird Song and Golden Peanut have reacted positively to the overall quality of Arkansas peanuts.

By using moisture sensors, flow meters and other monitoring equipment throughout the demonstration plots, Henry and other researchers are working towards establishing reliable recommendations for Arkansas peanut growers throughout the region. Although the project is only in its second year, Henry said initial recommendations for irrigation and fertilization have already increased participating growers’ per-acre profit margins by reducing water expenditures and increasing yields.