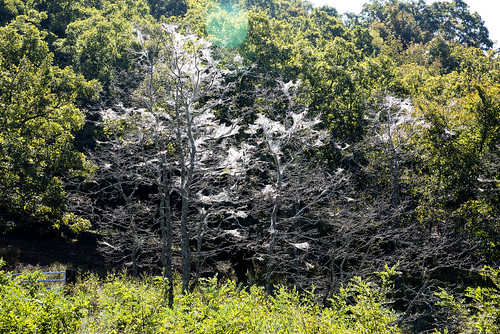 Not to worry — those web wrappings may look terrible, but University of Arkansas System Division of Agriculture entomologists say the caterpillars aren’t causing any lasting damage to the trees.

Fred Stephen, University Professor of forest entomology, said fall webworms vary greatly from year to year. Despite the unsightly aesthetics, the pests — known to entomologists as Hyphantria cunea — hatch too late in the year to interfere with the trees’ growth cycles.

“Their feeding will cause no real damage and the trees should be fine next year,” Stephen said.

Division entomologist Don Steinkraus said fall webworms are native to the entire United States. They begin spinning the webs immediately up hatching from eggs laid by the adult moth of the species.

Steinkraus said the webs serve to protect the caterpillars from their many predators, including birds, parasitic wasps, flies and others. They live communally within the webs and defoliate tree limbs by feeding on the leaves.

The species typically produces two generations each year, Steinkraus said, with the first hatching out around July and the second, often, larger hatch occurring in the fall.

This year’s large population follows a massive outbreak last year that saw many large trees completely covered in the webs. Although few trees are so thoroughly covered this year, so far, Steinkraus said the caterpillars will be actively feeding another two or three weeks and their webs will continue to spread.

Steinkraus said it’s not known why recent webworm populations have been so large.

“Usually, insects are controlled by the environment or by natural enemies,” Steinkraus said. “Something has changed that has allowed the webworms to increase beyond what they normally do.”

Steinkraus said such a change could be a reduction in natural predators. Insects are particularly adept at taking advantage of changes in the balance of nature.

Steinkraus said the best way to prevent damage is to take down webworm tents when found and kill the caterpillars manually, especially during the first generation in the summer. “The earlier the better,” he said.

“Just get your hands in there and pull them down,” Steinkraus said. “It may be gross, but they can’t hurt you.”