By Ryan McGeeney
U of A System Division of Agriculture
Oct. 3, 2016

LITTLE ROCK — The Arkansas State Plant Board moved last week to expand the emerald ash borer quarantine to include 33 counties throughout the state. The expansion adds eight new counties to the quarantine list, including Randolph County, where the presence of the invasive pest was recently confirmed, as well as the five counties that border it within the state: Fulton, Sharp, Lawrence, Greene and Clay counties. 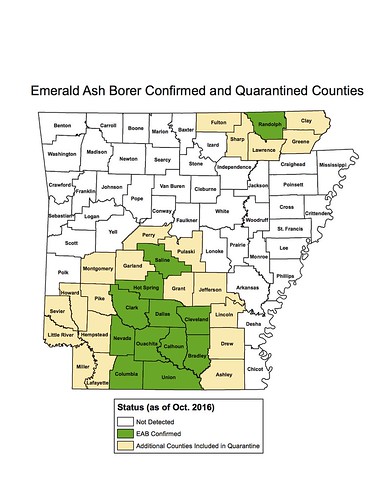 Pulaski and Perry counties have also been added to the 2014 list of quarantined counties designed to isolate the 11 counties in south central Arkansas where the invasive beetle has previously been confirmed, including Saline, Hot Spring, Clark, Dallas, Cleveland, Nevada, Ouachita, Calhoun, Bradley, Columbia and Union counties.

Randolph County is the 12th county in which the emerald ash borer has been confirmed.

It is illegal to transport certain items from within the quarantine zones to areas outside the zones. According to the Arkansas Department of Agriculture, quarantined items include firewood of any hardwood species, as well as ash tree products including:

Randolph County Cooperative Extension Service office chair Mike Andrews said the State Plant Board informed him of the beetle’s confirmed presence in his county in early August, but that he hadn’t heard from any residents who were concerned they might be seeing an infestation.

“I’ve put out information with the local media — newspaper and radio,” Andrews said. “If they think they might have a problem, we’re ready to get them all the information they need.”

Signs of infestation include:

Chandler Barton, a forest health specialist with the Arkansas Forestry Commission, said the AFC and the State Plant Board are currently developing control measures for the beetle by establishing parasitoid wasp populations at three sites in Arkansas, including Logoly State Park, White Oak State Park and on a private property near Arkadelphia.

“It typically takes about three years to establish the wasp population,” Barton said. “On the third year following the first introduction, we sample for the wasp to determine establishment and monitor its effect on the emerald ash borer.”

Barton said the wasps were imported from Asia to a facility operated by the U.S. Department of Agriculture’s Animal and Plant Health Inspection Service in Brighton, Michigan. This facility raises the wasps for biocontrol purposes and shares them with partners across the United States, he said.

For more information about the emerald ash borer, visit www.emeraldashborer.info or www.arinvasives.org. A fact sheet about the borer may be found at: “Emerald Ash Borer: A potential pest of ash trees in Arkansas”, downloadable at www.uaex.uada.edu/publications/pdf/FSA-7066.pdf. To learn more about treatment options for homeowners who suspect they may have an emerald ash borer infestation, contact your local county extension agent, or visit http://www.uaex.uada.edu/.