Stay Safe: What you need to know before building a fire

FAYETTEVILLE, Ark. — When the cold arrives, so does bonfire and fireplace season and with it, caveats about firewood safety.

One thing many might not think about when talking about firewood safety is insects. 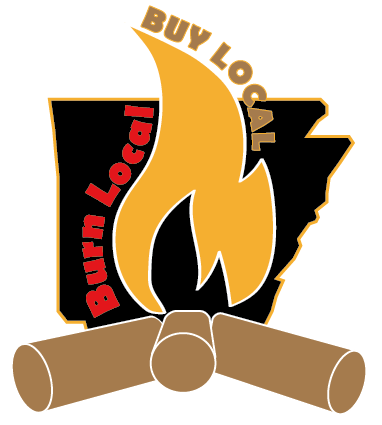 FIREWOOD -- Buying local and burning local is key to preventing the spread of destructive invasive species such as the emerald ash borer.

“Firewood has been implicated in the spread of several invasive pests,” said Jon Barry, extension forester at the University of Arkansas System Division of Agriculture’s Southwest Research and Extension Center.

The Arkansas State Plant Board has put a quarantine on a large portion of Arkansas since the arrival of the emerald ash borer, Agrilus planipennis Fairmaire, in 2014. This invasive pest kills ash trees by burrowing into the trunks of the trees and laying their eggs. The larvae then feed on the tissues that transport nutrients from the leaves to other parts of the plant, stopping the nutrient flow.

The emerald ash borer is native to Asia. Since it was first discovered in the United States in Michigan in 2002, it has spread to 27 states and parts of Canada, according to the Emerald Ash Borer Information Network. The borer,  which is a bronze or golden green hue with metallic green wing covers, measures about a half-inch in length. Though tiny, it has wrought big damage, being blamed for the deaths of millions of ash trees.

Thirty-three counties in Arkansas are under the emerald ash borer quarantine and 14 counties have been confirmed to have the beetle within their borders: Bradley, Calhoun, Clark, Cleveland, Columbia, Dallas, Hempstead, Hot Spring, Lafayette, Nevada, Ouachita, Randolph, Saline and Union.

It is illegal to move any species of firewood or hardwood, or any ash tree products out of a quarantine zone. These products include nursery stock, green lumber with bark attached, pulpwood, stumps, roots, branches, mulch, and living, dead, cut or fallen logs.

Arkansans are encouraged to burn only local firewood, instead of firewood brought in from other parts of the state or the country, to help stop the spread of the emerald ash borer.

This is of special importance to campers.

Barry said campers should obtain firewood from where they are camping, instead of bringing it with them.

Mohammad Bataineh, an assistant professor at the Arkansas Forest Resources Center in Monticello, said that signs of infestation are defoliation of branches, woodpecker damage, shoots sprouting out of dormant buds at the base of the tree or extending a couple of feet up the main stem, bark splits on smaller trees and D-shaped exit holes on tree trunks.

Bataineh is conducting research on the invasion, spread and consequences of the Emerald ash borer in Arkansas.

Invasive pests are not the only hazard people should be conscious of before building a fire.

Mauro Campos, battalion chief in the Training Division of the Fayetteville Fire Department, said one of the biggest fire safety mistakes he sees is using flammable liquids, like gasoline, to start fires.

Using flammable liquids can cause fires to grow too big, too quickly.

Campos also stressed the importance of chimney maintenance. He said his department responds to a lot of chimney fires this time of year, the main reason being they aren’t cleaned often enough.

“The primary problem is that people don’t clean it,” Campos said.

Chimneys serve to carry the byproducts of combustion – including smoke -- out of the home. These byproducts leave a residue behind on the chimney walls called creosote. Creosote is highly combustible, and when the inner flue reaches a high enough temperature, a chimney fire can occur.

Campos recommends cleaning your chimney once a year if you use your fireplace regularly or once every two years if you’re an occasional user.

A common held belief is that pine, or other soft woods, are hazardous to burn in fireplaces because they create an excessive amount of creosote.

According to the U.S. Department of Agriculture, pine is safe to burn as long as it is seasoned properly. Seasoned wood is wood with a moisture level of 20 percent or less. Pine takes a minimum of six months of outdoor drying time for it to be safe to burn.

“As a kid, I always heard that one should never burn pine in a fireplace or wood stove,” Barry said. “The reality is that cured pine creates no more creosote than properly cured hardwood.”