Div of Ag’s first wine grapes can stand up to Arkansas conditions, diseases 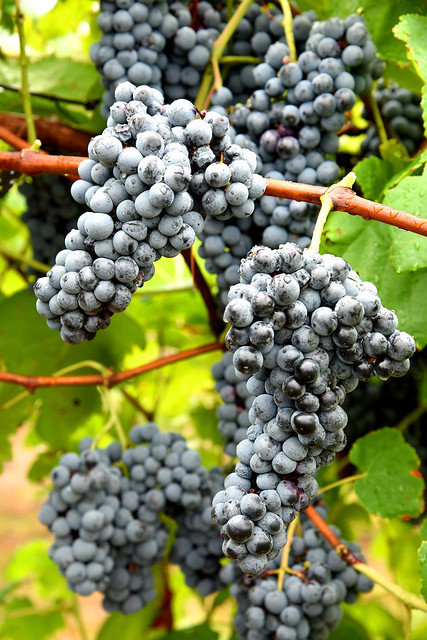 Clark and Renee Threlfall, research scientist in food science, introduced the new grapes to the Arkansas Association of Grape Growers during their annual conference in Ozark last Friday.

Some of the wine makers in the group have had early samplings of the grapes to test in their vineyards.

Keith Striegler, grower outreach specialist for E&J Gallo Winery, said he expects Opportunity is going to replace Cayuga, a New York grape that is one of the most common white wine grapes in the eastern U.S.

“It has all the good wine making features of Cayuga,” Striegler said, “without the problems associated with growing it.”

He said Enchantment also will make a fine wine grape.

A number of grape growers in the meeting said they were testing Enchantment or Opportunity in their vineyards, including Post Familie of Altus and Sassafras Springs Winery of Springdale.

Opportunity originated from a cross of Cayuga, a New York variety, and a selection from Semillion and Rkatsiteli, Clark said. This combination gives the white wine grape good adaptation to Arkansas growing conditions and results in a high quality grape.

Opportunity matures around the fourth week of August, Clark said. In 20 years of close observation, downy mildew was rarely seen and powdery mildew appeared only twice, suggesting some resistance to these two diseases.

Enchantment also matures around the third week of August. Like Opportunity, it seems to have the same potential resistance to common diseases, with only a light downy mildew infection in one year out of 18 and powdery mildew appearing only twice.

Clark said fungicide sprays should still be used because of other potential diseases and because of typically rainy weather during the growing season in Arkansas.

The chemical makeup of both grapes results in excellent wines, Clark said.

Threlfall said Opportunity is a flexible grape that can make wines with fruit forward flavors ranging from sweet to dry. “It has a wonderful, balanced finish,” she said.

Enchantment is a teinturier grape, Threlfall said, which gives it its rich, dark color.

“Enchantment is a very versatile wine grape,” Threlfall said. “The wine can be made into a rosé or a blush. It can be dry. Its flavor can be fruity or oaky.”

Clark noted that Enchantment’s unique pigmentation also makes it ideal for use as a blending wine.

Enchantment and Opportunity are patented and will be licensed to domestic nurseries, Clark said. Vines should be available in a limited number beginning this winter.