FAYETTEVILLE, Ark. – Once in the bottle, a great wine can take a decade to evolve, mature and reach the fullness of its aroma, flavor and body to delight the senses. Breeding the right grapevine to make that wine can take twice as long.

Such is the story of Opportunity and Enchantment, the first wine grape varieties released from the University of Arkansas System Division of Agriculture breeding program – a release more than 20 years in the making. 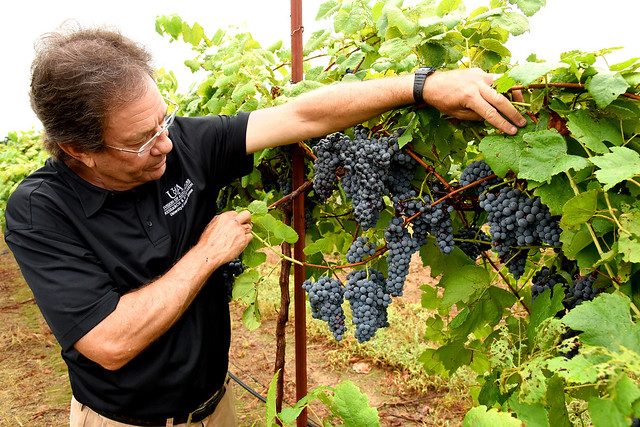 Initial evaluations on what would become Opportunity, a white grape, began in 1991, with the red grape Enchantment beginning two years later in the hands of John R. Clark, Distinguished Professor of horticulture and fruit breeder for the Division of Agriculture and James N. Moore, distinguished professor emeritus and founder of the Arkansas fruit breeding program.

Just as a good wine is never rushed, both Clark and Moore knew that breeding wine grapes that could be grown in Arkansas and similar climates was a long game. Grapevines can take three years to mature and produce a substantial crop.

“Slow. Compared to table grapes, breeding a wine grape is slow,” said Clark. “With a table grape, you look at it and say ‘this is firm, or this tastes good and it’s seedless,’ and you can usually quickly judge fresh produce.”

Over the years, vine after vine sent out its tendrils and birthed sweet clusters. After each hand-harvest from selected vines, the grapes were sent to the division’s Food Science Department for wine production and evaluation. Justin Morris, distinguished professor emeritus, and Renee Threlfall, research scientist in food science, crushed the grapes, added yeast and let the juice and musts ferment in glass jugs called carboys.

Through the decades, both Moore and Clark would breed world-class peaches, blackberries and table grapes for the fresh market. In the background, the dream of a wine grape that could withstand Arkansas’ disease-coddling humidity, fruit-cracking rains, brix-robbing heat and the ravages of its oft-icy winters, remained.

“We had more than 100 selections at one time,” Clark said. “We whittled them down to three or four” that showed potential to thrive in Arkansas and similar climates.

Helping in the selection was a handful of vineyards willing to give the experimental varieties a try. In 2002, some of the vines fell to the weather. Others simply never grew.

However, one grower, Thomas Post, of Post Familie Vineyards in Altus, nurtured the vines and among the selections, saw promise in one white and one red grape.

Threlfall said one of the biggest challenges to evaluating the selections was the small volume of grapes available each harvest season.

“We never had a great quantity – maybe 30 pounds to a max of 100 pounds is all we’d ever get,” she said. “It’s a very small scale for wine production, but not uncommon for research evaluations.”

Having only small or single-batches put severe limits on testing grapes for their wine potential, since many decisions can be made on styles during the winemaking process.

“When making wine from many different selections – sometimes more than 60 selections – we have to produce the wines all the same” in order to have comparable winemaking and tasting notes from one variety to the next; from one season to the next. Research demanded consistency.

The long haul has only made Threlfall more excited about the results. Of Enchantment’s wine, she says, “it has very Syrah-like qualities with low hybrid-like qualities. It can taste very much like a vinifera and can be very versatile.”

Vinifera is the species from which most modern grape wines are based.

As for Opportunity, Threlfall describes its wine as fruit-forward, flowing with floral and honey notes that could be made into a sweet or dry wine.

Enchantment is a teinturier grape, with an intense pigmentation and can be a standalone grape in a wine or blended with others.

“Enchantment is a very versatile red wine grape,” Threlfall said. “The wine can be made into a rosé or a blush or it can be dry with variations in extended skin contact to extract more tannins. Its flavor can be fruity to earthy, with the potential to handle contact with oak.”

With both varieties, “it’s the balance of the flavors. It’s not lingering, but it’s just right. You want to go back for a second sip.”

Clark said that for these first selections, he wanted names that reflected Arkansas and reflected on the product.

For Clark, his persistence of vision to work toward the release of Opportunity and Enchantment traced a nearly four-decade-long full circle. “I didn’t want to let it drop,” he said, after all, “I started with wine and grapes as a graduate student at Mississippi State.”

He named the red grape Enchantment “because it had a nice feel to it. Enchantment is an experience I associate with a red wine,” he said.

Opportunity originated from a cross of Cayuga, a New York variety, and a selection from Semillion and Rkatsiteli, Clark said. This combination gives the white wine grape good adaptation to Arkansas growing conditions and results in a high quality grape.

Opportunity matures around the fourth week of August, Clark said. In 20 years of close observation, downy mildew was rarely seen and powdery mildew appeared only twice, suggesting some resistance to these two diseases.

Enchantment matures around the third week of August. Like Opportunity, it seems to have some disease resistance, with only a light downy mildew infection in one year out of 18 and powdery mildew appearing only twice.

Clark said fungicide sprays should still be used because of other potential diseases and because of typically rainy weather during the growing season in Arkansas.

Enchantment and Opportunity are patented and will be licensed to domestic nurseries, Clark said. Vines should be available in a limited number beginning this winter from Post Familie Vineyards in Altus and Double A Vineyards Inc. in Fredonia, New York.

These grapes will be plant patented and licensing and propagation opportunities are available to nurseries through Cheryl Nimmo, cnimmo@uark.edu, or (497) 575-3953.