By Ryan McGeeney
U of A System Division of Agriculture
Nov. 4, 2016

LITTLE ROCK — As harvest draws to a close for several key commodities in Arkansas — rice, soybeans and cotton — growers have been making the most of the unusually warm, dry weather by preparing for spring 2017, University of Arkansas System Division of Agriculture agronomists said this week. 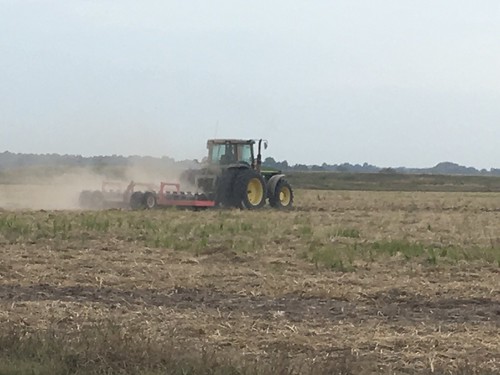 “Right now, there’s an incredible amount of field work going on,” said Jason Kelley, extension wheat and feed grains agronomist for the Division of Agriculture. “They’re preparing fields for spring planting and trying to get as much done this fall as they can while it is dry.”

A warm season with little rain

For the seven-day period ending Oct. 30, about two-thirds of Arkansas reported average air temperatures that deviated from 8.6 degrees to 10.4 degrees above normal for this time of year, according to a report published by the U.S. Department of Agriculture, making it one of the hottest Octobers on record in the area. Statewide, Arkansas received an average of 2.4 fewer inches of rainfall over the past four weeks than typical as well, with several monitoring stations — Camden, Hot Springs and Mena — reporting a deficit of more than 4.2 inches below the norm for the four-week period.

Aside from drying out pasture land, the warm, dry weather didn’t have any immediate effect on Arkansas crops, Kelley said, beyond speeding the harvest process. Even winter wheat, which is now more than 57 percent planted and more than 40 percent emerged, should be unaffected by the conditions, he said.

Scott Stiles, extension economist for the Division of Agriculture, said the conditions were a “net positive” for growers.

“However, at some point we need see a pattern change to recharge soil moisture,” Stiles said.

Stiles said that autumn weather is unlikely to affect growers’ commodity decisions for next year.

“I think it's too early to say if the weather will impact crop mix decisions for 2017,” Stiles said. “We irrigate such a high percentage of all crops that dry conditions would likely be a secondary concern versus say commodity prices.  The key concern over extended dry conditions would be the cost it adds to production.  Profit margins are already thin.”

Jarrod Hardke, extension rice agronomist for the Division of Agriculture, said that if the pattern of warm, dry weather asserts itself again in the spring, growers should exercise caution with regards to early planting.

“We’ve had three to four consecutive weeks of above-normal warm temperatures and no rain,” Hardke said. “What that usually points to — what happened this spring — is that if it’s just warm and dry enough, planting will begin extremely early. In recent years, that planting has started to occur outside our recommended windows for planted rice, beginning earlier even than our absolute earliest recommended planting date, not just our optimum window.

No one’s saying it’s not possible to produce a good rice crop outside our absolute,” Hardke said, referring to the research-based planting recommendations the Division of Agriculture publishes for crops throughout the state, “but the odds are against you. You’re taking increasing chances by moving outside of that window.”

Hardke said other key pitfalls of planting an entire crop within a narrow window of time is that it intensifies harvest scheduling pressures and can reduce the survivability of the crop when challenges arise.

“The problem with that is your entire crop all goes through every weather pattern at the same stage of development. Everything heads at the same time and it all needs to be harvested at the same time,” Hardke said.

“It’s difficult to spread those things out,” he said. “You can spread planting out considerably, and come harvest, you will still have a relatively tight window. However, it puts you in a position to minimize the damaged caused by any problems you encounter throughout the season, whether its pests, weather or something else.”

Hardke said even when growers fully intend to draw out their planting over a longer period of time, they still have to confront the knowledge that each day of clear weather may be the last for days or weeks to come.

“It’s the other way a grower rightfully tries to minimize risk,” Hardke said. “‘If I stop planting now, it may start raining tomorrow, and who knows when I’ll get to plant again.’ And sometimes, they’re expecting to spread out planting, and the rains never come. And the next thing you know, they’re pretty much done.

Hardke recommended planting a combination of crops in staggered waves, in order to avoid cramming all of any one crop onto the same timeline.

“A good approach is to plant some rice, then plant something else for a while, then come back to planting rice,” he said. “It means alternating crops at harvest, but it’s a good approach to staggering your rice planting and spreading your risk on all crops, while still taking advantage of clear weather, if we get it.”