By Ryan McGeeney
U of A System Division of Agriculture
May 20, 2016

ST. FRANCIS COUNTY, Ark. —A desire to attract deer has led a St. Francis man to try and build an orchard of a hybrid tree whose breeders hope can bring chestnuts, in some form, back to North American shores. 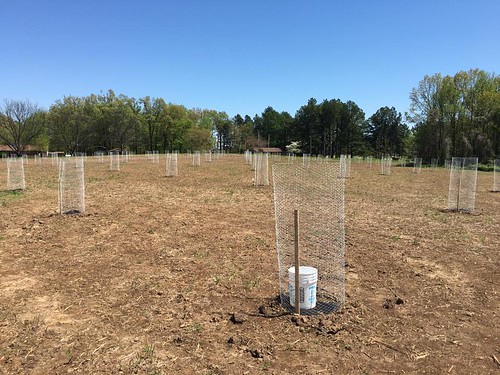 Once a giant of the forest, American Chestnut trees by the millions were felled more than a century ago when an invasive blight swept through the country. American Chestnuts were once common across the Appalachians Mountains and elsewhere in the eastern United States, was highly prized for its fine wood, which found use in musical instruments, shingles, siding, fence posts and furniture. Its nuts were valued as a protein source by native Americans and as a flavoring in many savory and sweet dishes internationally.

Arkansas was not within the range of American Chestnuts, but the state was home to a cousin, the Ozark Chinquapin, which has also been victim of the blight. (See: http://ozarkchinquapin.com/)

Now, using a blight-resistant hybrid drawing from both the American and Chinese Chestnut varieties, one landowner is hoping to establish a new grove in eastern Arkansas, one acre at a time.

This April, Randy Baldwin, a St. Francis County landowner, planted 115 Dunstan Chestnut trees on about two acres near Colt. Baldwin, a hunter and fisherman, said that after purchasing the land, he began researching trees that would be suitable for attracting deer to the area.

“Apparently, deer just love them,” Baldwin said. “And the more I read, the more interested he became.”

Tamara Walkingstick, associate director of the Arkansas Forest Resource Center and associate professor of Forestry for the University of Arkansas System Division of Agriculture, said the American Chestnut tree was always rare in Arkansas, the Ozark Chinquapin, a member of the chestnut family, was common throughout Arkansas and Missouri. But the wave of blight that swept across the country made both exceedingly rare in the Ozarks and Southern Plains.

“The disease came in about 1904, probably on horticultural stock, and then it just spread and spread,” Walkingstick said. “The American Chestnut and the Ozark Chinquapin, they are not extinct species — you’ll still see them in the woods. Typically, the tree will be infected, but it keeps growing, then it dies back to the root, and then try again. It might even try to fruit and have the burs — and those might have some inherent resistance.”

In the 1950s, a group of breeders, including Robert Dunstan in North Carolina, cross-pollinated American Chestnut trees with three Chinese Chestnut varieties, eventually creating the Dunstan Chestnut, which can grow to 60 feet tall, and reflect both American and Chinese chestnut traits. The seeds are now available through many retail outlets, although Walkingstick cautioned potential growers to carefully investigate the source of seeds before they purchase and plant them.

Baldwin said that during his own research, he discovered that the Dunstans can tolerate a wide spectrum of pH balance in soils, but that drainage is crucial.

“I talked with folks in Illinois, Iowa and Pennsylvania,” he said. “The one thing everyone told me was to definitely make sure I had the right piece of property before I ever planted a tree.”

Dunstans are sensitive to moisture, he said, and low-lying areas and soils with poor drainage should be avoided. Baldwin said he enlisted the help of St. Francis County Cooperative Extension Service agent Cody Griffin to test his soil and give his grove the best chances for success.

Baldwin said he hopes to continue to expand his orchard by about an acre each year.

To learn more about the trees of Arkansas or developing wildlife habitat, contact your local Cooperative Extension Service agent or visit www.uaex.uada.edu.