By Lynda Wilson
U o fA System Division of Agriculture
May 11, 2016

EMERSON, Ark. – One of the members of the team that won the Arkansas Soybean Science Challenge at the Southwest Arkansas Regional Science Fair said she was surprised at how little she knew about soybeans before taking part in the challenge. 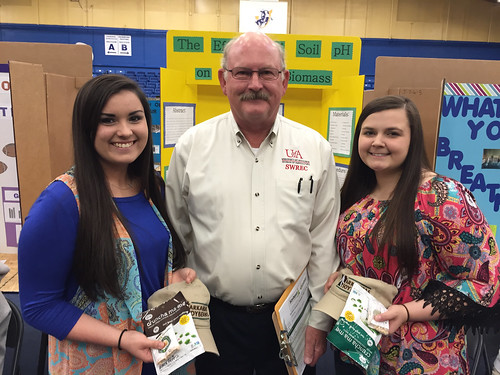 Makenna Madden and Breanan Cromeans, fellow juniors at Emerson High School, won the regional round of the Soybean Science Challenge at the 2016 Southwest Arkansas Regional Science Fair held at Southern Arkansas University in Magnolia on March 18. The team’s victory was the second for Emerson High in the Soybean Science Challenge. The team also won the top project award at the Southwest Regional Fair; both team members received scholarships to Southern Arkansas University in Magnolia.

The team received a $300 cash award provided by the Arkansas Soybean Promotion Board.  Their science project was conducted to determine at which level of soil pH would produce the greatest soybean biomass.

“I believe the most important conclusion of our project was that fact that we had the greatest soybean biomass in a pH that as not ideal for soybean growth,” Cromeans said. “Since we discovered that, we came to the conclusion that there were other factors that we were not taking into consideration. For example, we did not dry out our soybeans before massing them and this could have” made a difference in our results.

The team completed the Soybean Science Challenge online course as part of their requirement to receive the award at the regional science fair.  The part of the online course that appealed most to Madden’s team was the module on soybean production.

“I was not very familiar with the importance and uses of the soybean when I began this course,” Cromeans said.  “It was interesting to learn that even though soybeans are not native to Arkansas, we have become one of the top 10 producers.”

Madden, as a Future Farmers of America member, realized the importance of agriculture to Arkansas, but even so, Madden said she had little direct knowledge about Arkansas soybeans before she took the course.  “I didn’t know that soybeans could be used for so many different things,” said Madden. “I also didn’t know how soybeans are produced in Arkansas or the large scale on which they are produced.”

Cromeans, also an FFA member, learned about the link between Arkansas soybeans and livestock.

“I have shown hogs at our county fair for two years now. It was interesting to see that soybeans are a major part of my hog’s diet,” she said. “I couldn't believe that more than half of the soybeans grown in Arkansas went to animal consumption.”

Both team members expressed gratitude for the opportunity to participate in the online course which boosted their knowledge of the effects of soybeans on Arkansas and worldwide.

The team was honored to be the second Soybean Science Challenge winners from the Southwest region and Emerson High School. “There were so many great projects at the fair, and I am thankful that Terry Kirkpatrick, an extension plant pathologist for the University of Arkansas System Division of Agriculture, saw our project as the most potential and influential research,” said Madden.

Now that the team has conducted the basic experiment, they plan to grow more soybeans in soil with different pH, putting each plant in separate containers and in a controlled greenhouse environment to see how that affects the results.

Madden said what she gained most from her participation in the Soybean Science Challenge was the extensive use of soybeans, from crayons to paint to food for humans and animals.

Madden’s parents, Mike and Mary Madden, were very proud of her and thankful she won this very important award. “She has always been a leader academically and in other school activities,” said her dad.  Madden is involved in her church, vice president of the Future Farmers of America Club and homecoming queen.

“The Arkansas Soybean Science Challenge Award program is in its third year partnership between the U of A Cooperative Extension Service and the Arkansas Soybean Promotion Board,” said Karen Ballard, extension developer and director of the program for the University of Arkansas System Division of Agriculture.

The Arkansas Soybean Science Challenge was opened in January 2014 to 9-12 grade science students.  Students who successfully completed the online course were eligible to have their original soybean-related research projects judged at the 2016 ISEF-affiliated Arkansas science and engineering fairs.

Information on the 2016-17 Arkansas Soybean Science Challenge will be available in summer 2016.  For more information, contact Karen Ballard at 501-671-2086 or kballard@uada.edu.

The University of Arkansas System Division of Agriculture offers all its Extension and Research programs and services without regard to race, color, sex, gender identity, sexual orientation, national origin, religion, age, disability, marital or veteran status, genetic information, or any other legally protected status, and is an Affirmative Action.