By Dave Edmark
U of A System Division of Agriculture
May 6, 2016

FAYETTEVILLE, Ark. – Despite what people generally seem to think when they drive by a pasture with cattle grazing, the cattle are not fertilizing the grounds.

“Once you move cattle across your pastures, they will eat the forage and excrete the majority of the minerals, up to 90 percent,” said Dirk Philipp, associate professor of animal science at the University of Arkansas System Division of Agriculture. “But they will not add fertilizer. They just recycle it.” 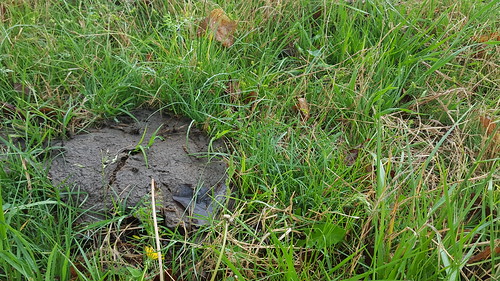 That leaves any additional fertilization and other grassland maintenance as people’s responsibilities. Farmers and ranchers today use improved species and varieties of forage in their pastures. The yield potential of these species is far higher than the original native grass species in the continental United States, Philipp said.

But farmers still must be careful to maintain adequate nutrient levels in the soil where these grasses grow. Modern forage grasses have a high yield potential and may deplete soil nutrients because the natural nitrogen input and the mineralization of the soil are relatively slow. Philipp warned against allowing soil nutrients to get too low because of the high cost of regaining optimum levels over a long time.

Philipp advised checking regularly on fertility and nutrient status with soil tests for nitrogen, phosphorous and potassium. “Then fertilize according to your yield goal without compromising the long-term ability of your pastures to produce healthy forage stands,” he said.

Because pasture ecosystems are not enclosed, nutrients will be redistributed and some will be lost. To increase efficiency of nutrient usage, Philipp recommended distributing animals – and the nutrients -- evenly across the landscape over time. He offered several suggestions for doing so: