LITTLE ROCK – Despite weekly waves of heavy rains, Arkansas farmers pushed across their fields, planting soybeans, rice, cotton and corn ahead of the five-year average pace, according to Monday’s report from the National Agricultural Statistics Service. 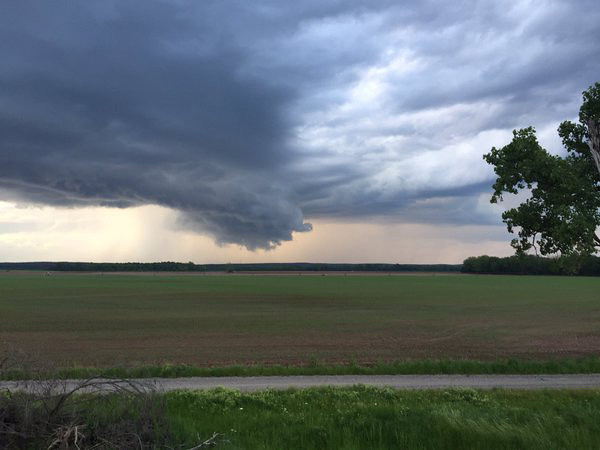 DARK CLOUDS -- What a lot of farmers around Arkansas were seeing in the last few weeks. Taken April 30, 3016, of a tornado-warned storm that swept through Faulkner and Conway counties in Arkansas. (Image courtesy Nick Moore/@3BrosFarms)

Rice was 87 percent planted, ahead of last week’s 75 percent and well ahead of the 59 percent five-year average.

“Rice progress looks right on,” said Jarrod Hardke, extension rice agronomist for the University of Arkansas System Division of Agriculture. “I had it figured about 90 percent planted versus the 87 percent reported.”

He said the remaining 10-plus percent is largely scattered around the southern half of the state with a few outliers in the north.

“Rice planting completion is notoriously trickle-down where it takes a month to plant the final 10 percent of acreage, so we could easily still not be completed until late May or June depending on the weather,” Hardke said. “As always if it stays wet for too long some of that rice magically starts turning into soybeans.”

Rain may not be the only factor in the rice-to-soybean sleight-of-hand.

Scott Stiles, extension economist for the Division of Agriculture, said soybean prices continued upward, with the November 2016 contract closing at its highest level of the year -- $10.17 3/4 – a $1.50-a-bushel gain since March 2.

“Considering the challenges in the southeast counties getting rice and corn planted this year, I think we'll see final soybean acreage in the state higher than the 3.05 million indicated in the March 31 Prospective Plantings report,” he said. “And, simply the size of the soybean price rally may have shifted some acres from the competing crops regardless of planting delays. The $10 price is still attractive in the minds of growers and was a surprise to see a recovery to that level this year.”

November soybean futures settled 10 cents higher Monday on talk that crop losses in Argentina may shift some additional soybean and soy meal demand to the U.S. “Some expect to see U.S. soybean crush and export demand increased in next week's May USDA supply and demand report,” Stiles said.

Hoping for a drier spring

The soybean crop was 32 percent planted. That compared with 17 percent at the same time last year and the 24 percent five-year average.

“For the soybean crop, probably will not get much planted until the end of this week,” said Jeremy Ross, extension soybean agronomist for the University of Arkansas System Division of Agriculture. “Some fields may take longer to dry out.

“We still have a ways to go with soybean planting,” he said. “I was hoping we would have a drier spring than the last couple of years, since soybean producers are going to need all the help they can get this year. When we do get some drier conditions, it will not take long to plant the soybean crop with the large planter many soybean producers are currently using.”

Cotton was 36 percent planted, up from last week’s 3 percent, and ahead of the 19 percent five-year average.

“Planting progress much greater north of I-40 this spring,” said Bill Robertson, cotton agronomist for the Division of Agriculture. “There was very little planted in April last year.  This year, for some -- especially in far northeastern Arkansas like Clay County -- the majority of their cotton was planted in April.”

Robertson said he expected statewide planting to be around 40 percent or more of the expected acreage at this point or better, “or about 5 greater than they reported. Not enough difference to get excited about.

“We just need sun to shine and low temps to climb above 60,” he said.