MONTICELLO, Ark. – Wildlife biologists are racing to assess the extent of chronic wasting disease in elk and deer since it was first confirmed in one female elk and one female deer in Newton County in February and March. 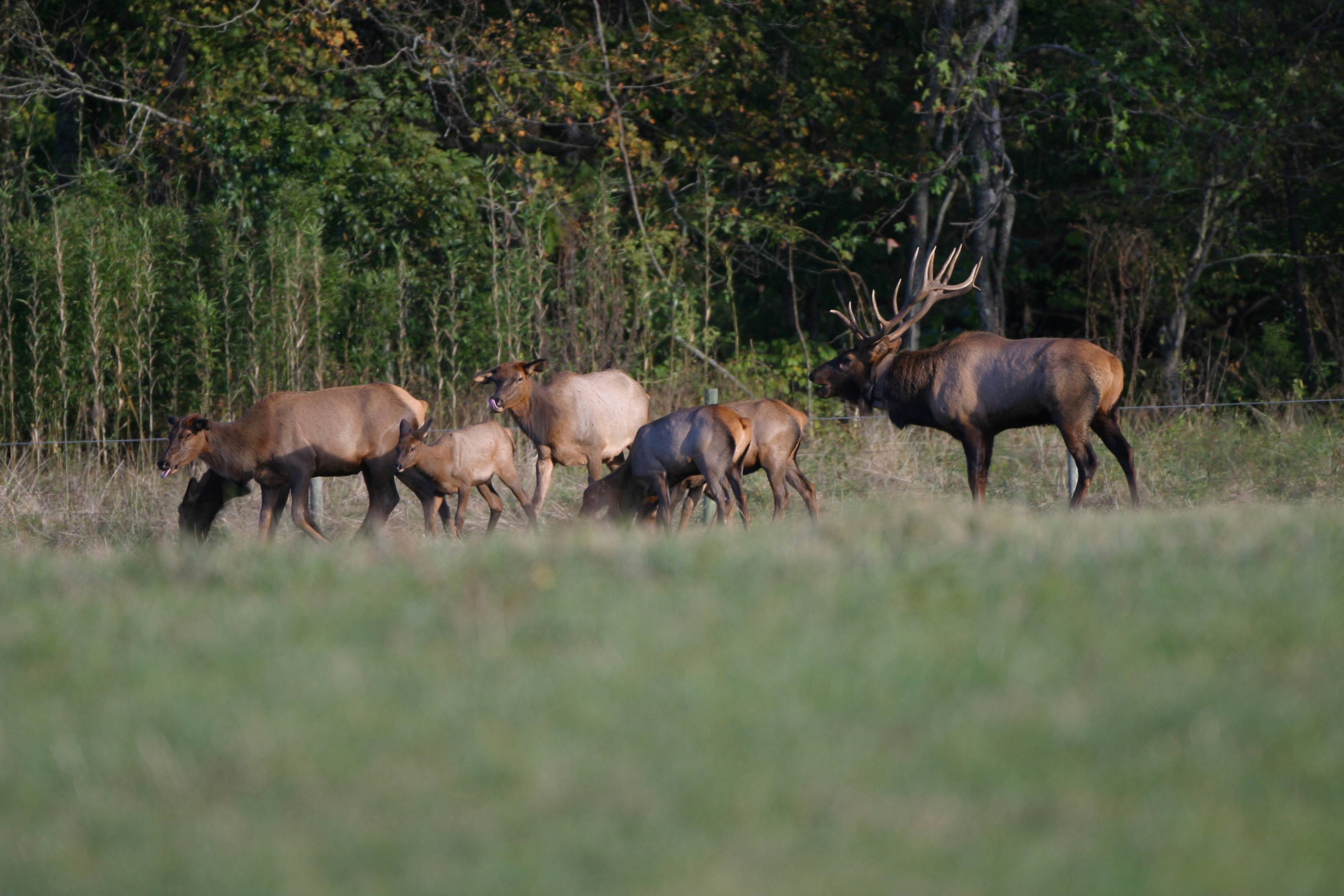 BROWSING -- Bull elk with a radio collar and elk cows and calves, taken in NW Arkansas. 2004 file photo (U of A System Division of Agriculture file iimage by Don White, Jr.) .

Chronic wasting disease, or CWD, kills members of the deer family, which includes white-tailed, mule deer, elk, and moose by altering proteins called prions in their brains. CWD was discovered during routine testing of brain and lymph tissue from harvested and road-killed elk and deer. The elk that tested positive for CWD was legally harvested by a hunter near Pruitt in October 2015; the deer that tested positive was found dead near the Elk Education Center in Ponca.

The Arkansas Game and Fish Commission has begun sampling deer and elk in the Pruitt area to determine the prevalence of CWD and the distribution of the disease, said Cory Gray, AGFC deer program coordinator.

“We have to understand the extent of problem before we can develop a plan to deal with it,” Gray said, adding that even though CWD is found in elk in western states, “Our elk are different in that they don’t migrate like elk do in many western states. We are not sure we utilize a western disease management strategy in Arkansas.”

Don White, Jr., wildlife ecologist for the University of Arkansas System Division of Agriculture based at Monticello, said the first step in understanding CWD in Arkansas is to determine the extent of the disease in the elk and deer herd in the area the CWD-positive female elk was harvested.

White has studied the state’s elk herd since 2003. His research has included tracking movements of both bulls and cows with radio collar technology; determining the causes of bull elk mortality; determining seasonal forage use and determining the attitudes residents of elk range have about elk and elk management.

“We know virtually nothing about the genetic diversity of our elk herd and whether or not the herd genetically functions as a single herd or as several subherds,” White said. “We also don’t know if we can assign the CWD-positive female elk to the herd she was located near when she was harvested. To answer that question, I will compare portions of the DNA from the harvested female to DNA from members of the herd. If the female is not genetically related to the members of the herd, she could have escaped from a captive facility. You would be surprised how many captive facilities in Arkansas have elk in them,” White said. “Captive facilities are a hot spot for wildlife diseases.”

There’s another facet to the genetic research.

White said that there has been a moratorium on moving cervids – or members of the deer family -- across state lines since 2013.  However, “people are still doing it.” The Arkansas Game and Fish Commission has looked at recent citations given by wildlife law enforcement. “There have been over 100 carcasses transported from out of state,” White said. “Some have been dumped in the Buffalo River watershed where elk occur. Perhaps the chances are remote, but it is possible that an illegally dumped CWD-positive elk or deer carcass may have brought CWD to Arkansas.

Chronic wasting disease is among a family of prion diseases that can affect humans and other animals, with the most well-known being bovine spongiform encephalopathy, or “mad cow disease.” Prions are misfolded proteins that induce normal proteins to convert to an abnormal form. CWD is not considered a threat to human health, though hunters are being told not to eat the meat of a known CWD-positive animal.

“The proteins thought to cause CWD exist in the environment for very long periods of time,” White said. “Elk and deer take quite a bit of soil into their mouths while foraging. If prions are in that soil, that’s one way they could pick it up.”

“There are other means too,” White said. “Elk and deer are social animals. There is a lot of nose-to-nose contact between them. An infected animal could transfer CWD to another animal through body fluids such as saliva, urine, or feces” White said.

White said that “some of my elk movement data were used initially to put sideboards on what we might expect to see in terms of the extent of transmission of the disease.”

His work on elk movements revealed that some male elk have relatively small home ranges, in the neighborhood of 5,000 acres or so. Other male elk, however, have huge home ranges, up to 50,000 acres. That upper limit, helped wildlife officials define the size of the initial containment zone.

For more information about wildlife management, contact your county extension office or visit www.uaex.uada.edu or arfc.uamont.edu.