By Ryan McGeeney
U of A System Division of Agriculture
June 17, 2016

LITTLE ROCK — University of Arkansas System Division of Agriculture experts warned this week that early signs of fungi including soybean rust and southern rust in neighboring states may leave some Arkansas crops more vulnerable than in most years. 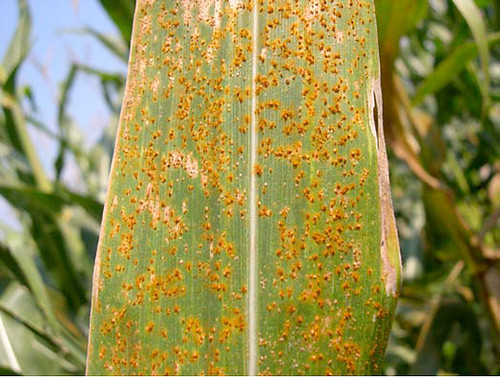 Travis Faske, extension plant pathologist with the Division of Agriculture, said soybean rust, a fungus that was first detected in Arkansas in 2004, was detected in Louisiana about a month earlier than normal this year. The fungus is normally reintroduced to the southern United States and Midwest each year as spores travel on northbound winds from Central America in the spring and summer months.

Soybean rust has typically had little impact on yield in Arkansas, but its early appearance serves as an indicator that a related fungus, southern rust, may arrive early as well.

“Southern rust is especially damaging to corn if it attacks between the initial tasseling stage and the milk stage,” Faske said. “Corn that’s been planted a little early, and is already into the later reproductive stages, isn’t affected too badly.”

Reports from extension personnel in Louisiana suggest southern may enter Arkansas about two to three weeks earlier than normal, potentially catching much of the state’s corn in a vulnerable stage of development.

“The severity is determined by temperature and free moisture,” Faske said. “If we get a heavy dew or a high humidity, that’s favorable for the disease. The disease likes the temperature to be in the 80’s and 90’s, for a high temperature.”

Faske said that southern rust in corn research plots led to a significant decrease in yield in those plots in 2015.

“At the end of last season, in my research plots, we had 70 percent of plants covered in rust,” Faske said. “The ear leaf was 70 percent covered in pustules. So that’s significantly high. That transferred into more growers seeing it further north than we had in a long time. We had northern Arkansas counties that rarely have had an issue with it before, now finding themselves having to deal with the southern rust.”

Faske said that growers’ best option for preventing damage from southern rust was to regularly scout their fields, and to treat when appropriate with a foliar fungicide.