Summer turns up heat for ranchers to aggressively manage fescue

By Mary Hightower
U of A System Division of Agriculture
June 10, 2016

FAYETTEVILLE Ark. – When summer turns the heat up, ranchers in the fescue belt need to manage pastures more aggressively. 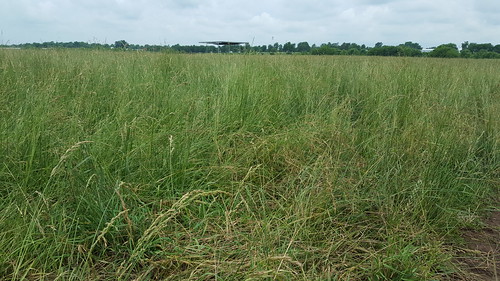 “Kentucky 31 comes with a host of advantages, including persistence under grazing, its relatively low fertilization needs and because it’s a cool-season grass, has good stockpiling potential,” said Dirk Philipp, associate professor-Animal Science, for the University of Arkansas System Division of Agriculture.

Kentucky 31 fescue is also infected with a fungus called an endophyte which can, under certain conditions, increase alkaloids in the forage that can have negative impacts on animal health, including “raised body temperatures whose effects are exacerbated in hot fescue-belt summers,” he said.

Philipp said there are strategies for alleviating fescue toxicity in the short term:

In the long term, Philipp said, consider switching from Kentucky 31.

Among the advantages of the novel endophyte fescue: the seedheads are not toxic.

Philipp said old fescue stands can be converted to novel endophyte fescue at smaller rates, such as 25 percent of the total area, then another 25 percent a few years late.

Novel endophyte fescue will not become infected by Kentucky 31 and “will only thin out if Kentucky 31 plants remain and the pasture is completely ill-managed,” Philipp said.

For more information about forages, visit www.uaex.uada.edu or contact your county extension office.