By Olivia McClure
U of A System Division of Agriculture
July 8, 2016 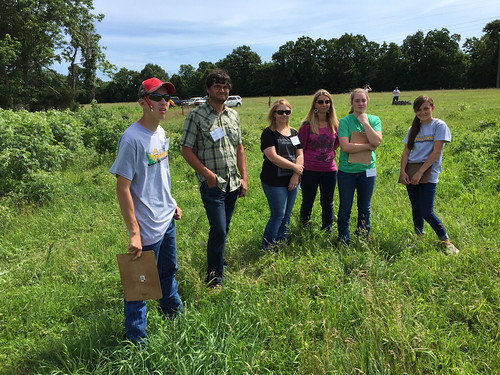 On June 8, each team and individual competed in four main events, Grassland Condition, Wildlife, Soil, Plant ID. At the end of the competition it was Arkansas 4-H that took first through fifth-place high point individual, and tied for overall high individual with FFA, and took first, third and fifth place in team competition.

Cleburne County took the first place overall team, edging out West Virginia FFA, for the top honors with 1,075 points out of 1,200. Along with the 4-H team win, Cleburne County also had the top four high point 4-H individuals.

Stephen Wilson, placed not only as 4-H high-point individual, but also tied for overall high individual against FFA. Out of the individuals in the 4-H competition, Rachel Wilson was second, followed by Luke Wilson in third and Kathryn Bechdoldt in fourth.

Randolph County took the third-place 4-H team, with Blaine Huddleston ending as fifth-place high point individual. The Madison County team took fifth-place high point team. The Van Buren and White county teams also qualified to compete at the Mid-America competition. In fact White Co. Coach Amy Heck stated, "This was our first experience and it was a great one. We look forward to returning next year."

Arkansas competed against four other states including West Virginia, Indiana, Ohio, and Missouri, resulting in a total of 19 teams competing for a win.

"One thing about this competition is that the skills learned in order to compete, are readily transferrable to everyday life, especially interpreting data,” said John Jennings, professor-forages, for the University of Arkansas System Division of Agriculture, “It helps students in college and beyond."

For more information about the Grassland Evaluation Contest, visit www.uaex.uada.edu or contact your county extension office.