Dicamba resistance in pigweed selected in research greenhouse, not in the field
skip to main content
News - 2016

Dicamba resistance in pigweed selected in research greenhouse, not in the field

NEWPORT, Ark. – University of Arkansas System Division of Agriculture researchers have selected for dicamba-resistant pigweed, documenting how genetic resistance develops and how the industry must work to protect the few remaining weed-fighting options.

Bob Scott, an extension weed scientist, emphasized that the finding was the result of controlled greenhouse studies and not a confirmation of anything found in any field. 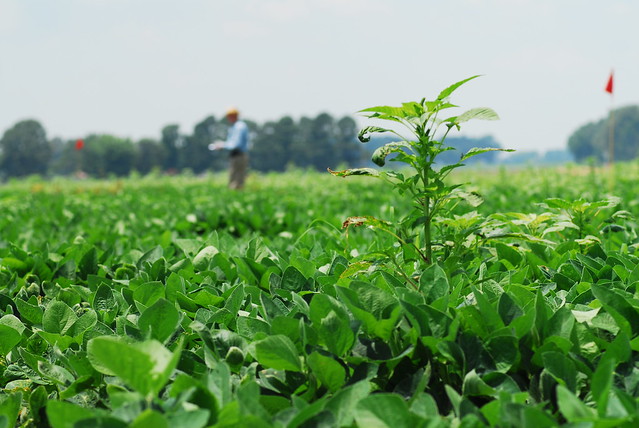 PIGWEED  -- Pigweed pokes its head above a soybean field in this 2009 file photo. (UofA System Division of Agriculture image)

“Through experimentation in the greenhouse, we selected for a population of pigweed that is tolerant to the herbicide dicamba at a field rate,” Scott said Monday. “This pigweed population was not found to be resistant to dicamba in nature or in any field.”

The researchers began with dicamba-susceptible pigweed collected from the field. The researchers exposed three generations of pigweed to sub-lethal doses of dicamba, “which, of course, is a recipe for resistance development,” Scott said.

The first two generations were still susceptible to dicamba. The third generation was now resistant. Scott emphasized that this resistant population is highly controlled and will never be released to the field.

“The research that was conducted in the greenhouse that resulted in a dicamba-resistant pigweed illustrates how multiple resistances have developed,” Scott said. “One pesticide quits working and so we replace it with another, and so on and so on, until you are left with a weed population or insects for that matter that can tolerant multiple modes of action.

“This is the inevitable result of using a single effective mode of action to control a given pest,” he said. “As new technologies emerge we must be diligent in our efforts to stop this cycle”

It was pigweed’s emerging resistance to glyphosate that drew international attention to the issue of herbicide resistance. With glyphosate out of the picture as an effective control on a growing number of farms, soybean and cotton farmers looked to dicamba to manage the notoriously difficult weed with the release of Xtend soybean and cotton. The Xtend crops can tolerate dicamba deployed to control weeds.

Scott said the greenhouse findings plus the lack of emerging control options paint a frightening picture for growers.

The 78-character tweet turned into scores of phone calls on Monday to Scott, Norsworthy and colleague Tom Barber, also a weed scientist with the Division of Agriculture.

“I think between the three of us we fielded at least 100 calls,” Scott said Monday night. “I even had farmers asking whose field we found it in, and of course this was a greenhouse-only finding.”

For farmers, the number of tools they have for weed control is dwindling quickly. (See “Loss of Enlist Duo cuts already thin weed-fighting arsenal for bean farmers,” http://bit.ly/EnlistDuoArk2015) And it’s not just that the pigweed is resistant to one class of controls, but “some of these populations have now been found to be resistant to as many as four formerly effective modes of action,” Scott said.

The researchers, in their conclusion said their finding “strongly suggests that there will be sizeable evolutionary consequences if dicamba is not properly stewarded in dicamba-resistant crops such as applying it repeatedly in a manner that provides less than complete control.”

“This is of great concern to us,” Scott said.

For more information about crop production, contact your county extension office, or visit www.uaex.uada.edu or http://arkansascrops.com.