By Ryan McGeeney
U of A System Division of Agriculture
Jan. 15, 2016

LONOKE, Ark. — As the winter sun came rose over the eastern horizon Wednesday morning, the edge of Mitchell Farm Partnership along Highway 31 was filled with the raspy sound of thousands of bushels’ worth of corn flowing into a series of truck beds, headed for chicken houses throughout the state. 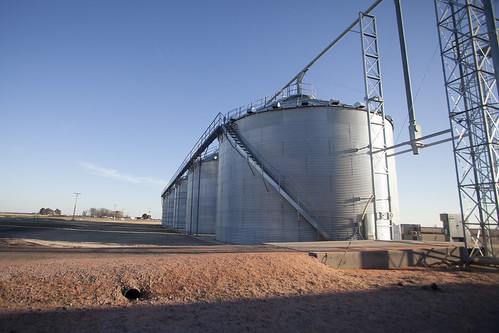 The grain moving out from Mitchell Farm Partnership this week was booked for January months ago, said farm manager Scott Mitchell. Although different growers will contract with buyers for rice, corn or other grains throughout the year, market forces and farming tempo often affect decisions on timing.

“This is a good time for us, because we’re not real busy,” Mitchell said. “If we weren’t doing this today, we’d be in the shop, working on equipment.

"I've seen people hold their crops all year long, and sell it right before the next harvest,” he said. “But we typically want to get it in, get it dried and get it moved.”

Mitchell is one of many Arkansas growers who have adopted grain bins as part of an overall marketing strategy, which both helps protect harvested crops and gives growers some leverage in a market in which the primary producers are typically “price takers” rather than “price setters.”

Mitchell purchased the five massive bins, each of which can store 40,000 bushels of grain, in 2009. He said that prior to erecting the storage system, he and his farm hands would have to let corn field-dry as harvest time approached, leaving the crops exposed to the weather until a desired moisture level was achieved. Likewise with rice, which Mitchell would haul to a nearby mill.

By storing rice, corn and other grains themselves, growers can gain marketing advantage by not selling immediately after harvest, said Jeff Welch, staff chair for the Lonoke County Cooperative Extension Office.

"Typically, the price throughout the year is at it's very lowest at harvest,” Welch said. “And the reason for that is that there's a glut of grain in the United States, and people can only use so much.

"They'll use their grain bins to store their grain until the price recovers to a point where they can make a profit — and that's what grain bins are for,” he said. “So we're getting more and more grain bins here in Arkansas for that specific reason. It allows flexibility in marketing, and that's everything.”

Mitchell said that using the bins added a new element of responsibility between harvest and delivery.

“Once you’ve got a harvest in there, that bin is basically full of money,” he said. “After a rain, you’ve got to get in there and check that everything’s all right. Until it’s delivered, it’s an added risk you’re taking on — a bigger responsibility for the owner.”

The bins also require an additional eye toward safety. Welch said that Arkansas experiences one to three grain bin fatalities each year, involving workers who are swallowed, crushed or otherwise killed while working in bins.

"Grain bin safety is absolutely crucial, not only in corn, but especially in hybrid rice,” Welch said. “What can happen is that the producer will fill his bin, his grain will be dry, but at some point, he'll take some grain out of the bottom of the bin. If there's a crust on top, what happens is, it looks like the bin is full, but it may only be half full. And if he gets in that bin at that point, he can crash through that crust, and it can swallow him alive.”

Welch said keys to grain bin safety include ensuring that grain is “coned” at the top of the bin, rather than flat across; drying grain as much as possible before it goes in the bin; and for workers to wear safety harnesses and to never entering the bin alone.

"More and more farmers are trying to achieve economies of scale through farming larger and larger acreages,” Welch said. “Once that happens, grain bins come into play, because they have to have the ability to market their product effectively.”