FAYETTEVILLE, Ark. – A research and tech transfer project that started out as “an academic lemonade stand,” is now part of company with global reach whose royalties help boost education and research within the University of Arkansas System Division of Agriculture. 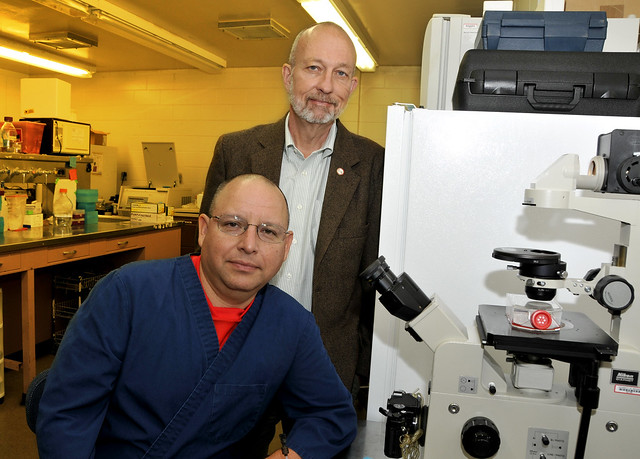 TECH TRANSFER - University of Arkansas System Division of Agriculture poultry scientists Guillermo Tellez, foreground, and Billy Hargis conduct research on the use of probiotics and prebiotics to improve the health, performance and food safety of poultry in the John Kirkpatrick Skeeles Poultry Health Laboratory. (U of Arkansas System Division of Agriculture photo)

In October, when the multinational biotechnology company Novozymes acquired the Fayetteville-based Pacific Vet Group-USA, it was the latest step in the evolution of a business that began nearly 15 years ago in Division of Agriculture research labs.

With 23 employees, including nine UA graduates, now on the staff, Pacific Vet Group-USA has several new technologies in the works and four products in the pipeline.

“The real goal for starting this was to try to sponsor research and to transfer Division of Agriculture technology,” said Billy Hargis, a poultry science research professor who was there at the beginning. “The excitement of this is that it’s actually turned into something. This would not have happened without the Division of Agriculture administration being supportive of this type of activity. It’s a little bit outside the box.”

Hargis was referring to the early 2000s when he and poultry science professor Guillermo Tellez were working with a major poultry integrator on a beneficial bacteria to solve diarrhea problems in the birds that were complicated by bacterial infections. But there were also beneficial bacteria – probiotics – within the gastrointestinal tract that Hargis and Tellez determined would be able to compete with the pathogenic bacteria and avoid the use of antibiotics.

“Nurturing scientific discoveries into market products is among the most valuable things we do,” said Mark Cochran, U of A System Vice President for Agriculture. “Each invention takes a unique path to commercialization. “This is a great example of true public/private collaboration that has brought our research to the marketplace in a successful manner.”

Early research was driven by collaborations among Annie Donoghue of the U.S. Department of Agriculture Agricultural Research Service, Dan Donoghue of the poultry science research faculty, Hargis, Tellez and a host of graduate students and technicians from their programs.

The business angle began when the poultry integrator told Hargis and Tellez it wanted its lab product made available for treating its flocks. “We’re talking about a fairly substantial number of animals,” Hargis said. “The problem was we couldn’t produce that type of material in a research laboratory. It’s too large a scale and we’d have to scale up production.”

So in 2003 the poultry integrator offered to pay for starting a small company to produce the probiotics. The company called Sigrah Zellet LLC was born. (The odd-looking name is Hargis and Tellez spelled backwards.) The Division and the poultry integrator shared ownership but it was still a small operation with only Hargis, Tellez and graduate student Chris Pixley to take care of business. They found that running a business was not what a small group of scientists was best equipped to do.

“It was basically an academic lemonade stand,” Hargis said. “For example, our idea of inventory control was to look on the shelf and see what we had. And our idea of accounting was looking at the checkbook.”

Sigrah Zellet began working with the Asian affiliate of Pacific Vet Group to handle distribution of its product overseas, leading Asian customers accounting for 70 percent of Sigrah Zellet’s sales. Pixley, who had been a doctoral student under Hargis, was Sigrah Zellet’s only full-time employee and noted that the U.S. market needed to be tapped.

“The majority of our money was being made exporting products when we were actually sitting right in the heart of poultry country,” said Pixley, who is now vice president of operations for Pacific Vet Group-USA. “We knew there were things we could do to improve our U.S. presence but it would take money and expertise to make that happen.”

In 2008, Pacific Vet Group stepped in to purchase Sigrah Zellet’s assets and ramp up the operations. Bill Davies, Pacific Vet Group-USA’s chief executive officer, said the company inherited a solid organization ready to go to the next level. By 2015 the company’s sales ratio had shifted to 80 percent domestic and 20 percent international as it realized a significant boost in revenue.

“During the Sigrah Zellet years they were basically running it as an academic spinoff. They developed the initial products and they established the relationship with the university,” Davies said. “Pacific Vet Group took it from that stage up to where it was a true commercial enterprise. It had facilities and manufacturing activities, repeat customers and was a meaningful maturation of something that started with Hargis, Tellez and Pixley.”

Pixley described the mission of the company in its various phases as a business seeking to offer solutions for the poultry industry for everyday problems. The current drive worldwide to eliminate the use of antibiotics and growth promoters has been a major force in the company’s development and distribution of alternative products.

Pixley said its in-house product development was assisted by contract research with the Division of Agriculture.

“The relationship has been mutually beneficial,” Pixley said. “We’ve had access to great talent and great facilities and resources. If we have questions, we can find friends in the Department of Poultry Science to help us, and that’s very meaningful.”

The company now operates as a subsidiary of Novozymes and its name will eventually change to Novozymes Animal Health and Nutrition USA Inc. Pixley noted that Novozymes is aware of the need to improve technologies to create more food and views the U.S. market as important for food production with the poultry industry as a major part of it. He said Pacific Vet Group has been well aligned with Novozymes’ corporate goal of providing biological solutions to drive a more sustainable approach to food production.

“We’ve been able to develop products that mitigate salmonella and impact salmonella infection,” Pixley said. “We work with the technologies that help make food safer.”

For more information about the Division of Agriculture’s research, visit aaes.uark.edu.