Arkansas crop production down for most 2015 commodities

LITTLE ROCK — Overall production numbers for most Arkansas crops fell in 2015 compared to the previous year’s record yields, and wet weather was the prime suspect, said Scott Stiles, extension economist for the University of Arkansas System Division of Agriculture. 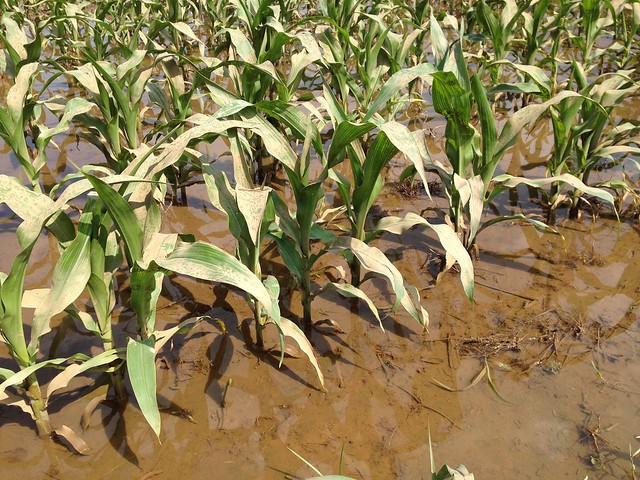 CORN -- Receding flood water on May 14, 2015, left leaves covered in silt in this Perry County, Arkansas, farm. (U of Arkansas System Division of Agriculture photo by Jesse Bocksnick)

“We had more than 707,000 acres of prevented planting,” Stiles said. “Given the weather we had, that makes perfect sense.”

CORN -- Arkansas corn production fell almost 20 percent, from about 99.1 million bushels to about 80.5 million. Nationally, the crop dropped 4 percent from 2014 production numbers. Corn was harvested from 445,000 acres, down 16 percent from last year. Yield was estimated at 181 bushels per acre, down six from the previous year’s record high.

SORGHUM – The state’s grain sorghum production experienced a gain of 169 percent to about 43.1 million —reflecting the 167 percent increase in acres planted over 2014 to 440,000. Stiles said that as market prices for grain sorghum have collapsed over the last year, growers were likely reduce their sorghum acreage back to 2014 levels, when growers harvested 165,000 acres of the grain. Sorghum yield was pegged at 98 bushels per acre, up one bushel from 2014.

SOYBEANS -- Arkansas soybeans did not meet NASS forecasts of another record year for yields, fell slightly from 2014 in acres harvested, average yield and production. Growers produced about 155.3 million bushels of soybeans, down 2 percent from adjusted 2014 numbers. Nationally, soybeans production increased slightly. Yield was estimated at 49 bushels per acre, down a half bushel from the previous year’s record high.

Jarrod Hardke, extension rice agronomist for the division, said that although production has fallen, and U.S. rice stocks are reportedly the lowest they’ve been in eight years, the commodity price will likely continue to remain relatively low, and will not likely change Arkansas growers’ current decisions regarding acreage allocations one way or the other.

“We’re probably looking at about the same projection number we had for last year — which we didn't fulfill because of the weather,” Hardke said. “But 1.5 million acres is probably a reasonable projection going into this year."