Growers, agronomists regroup for fresh planting season after a confusing 2015

By Ryan McGeeney
U of A System Division of Agriculture
Jan. 11, 2016

LONOKE, Ark. — After a year of unpredictable weather patterns and steadily depressed commodity prices, extension agronomists with the University of Arkansas System Division of Agriculture gathered at the Lonoke County Cooperative Extension office to help prepare growers for a fresh start in 2016. 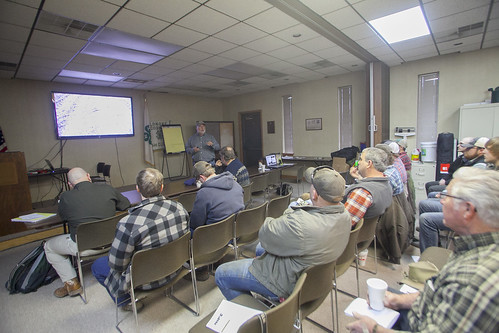 “We’re going to get past 2015, right?” Jarrod Hardke, rice agronomist with the Division of Agriculture, said to a room of about 30 growers attending the Jan. 4 Lonoke County Ag Day. “It happened, and right after this, we’re done talking about it.”

The meeting was one of the first of about 30 winter production meetings scheduled around the state over the first two months of the year. The meetings are a chance for local growers, consultants and other to learn about the latest agricultural research being conducted by Division of Agriculture researchers.

As Hardke presented current research results on seeding rates, insecticide and fertilizer use and other aspects of farming one of the state’s largest crop, he acknowledged the unusual weather scenarios growers dealt with in 2015.

“In 2015, the cold-and-wet, the roller coaster yields, never really stopped,” he said. Spring rains substantially delayed planting for many Arkansas rice growers — a situation that normally results in diminished yields.

“If you planted during what’s typically one of our best times to plant rice, you may have had one of the worst results you’ve had in years,” Hardke said. “In 2015, many folks’ later rice was better than their early rice, and that, quite frankly, just doesn’t happen.”

Mark Sandage, a Lonoke County growers who farms about 5,000 acres of rice, corn and soybeans, said he had actually benefitted from the off-tempo weather of 2015.

“I farm a lot of low land, and I had a lot of prevented planting,” Sandage said. “But the flooding was actually beneficial to me, because it pushed my crops later than most, and I actually had better yields.

“We had a lot of acreage that was prevented planting in rice, that moved to the soybeans,” he said. “Just kind of a strange year.”

Several growers in attendance said that their primary concern for 2016 was simply to maintain their operations long enough to see a return to higher commodity prices and greater profitability.

Robby Bevis, a Lonoke County grower who farms about 2,800 acres of beans, corn and rice, said he hoped to make the best of the markets with the soil he had.

“I’m just trying to break even and stay in the business,” Bevis said. “When you look at the numbers, nothing’s very profitable at all. Rice isn’t really an option for me, because I’m in a critical groundwater use area, and it’s sandy, corn-type soil. It’s not like I can jump to rice, even if it looks like it has the better margins.”

Bevis said the uncertainty of Price Loss Coverage payouts was also a source of anxiety.

“You just never know when you’ll get a payment, or how much,” Bevis said. “We won’t know if we’ll get a 2015 payment until October of this year. And the way things are right now, there are going to be a lot of people who need it today — it’s going to be a day late and a dollar short for them.

“It seems like we’re doing a whole lot more work with the Farm Service Agency than we ever were before, for not knowing what we’re doing,” he said. “A lot of the decisions we were making were just a roll of the dice. You pick one program or the other, and we won’t really know until after the fact whether we’ve picked the right one.”

Scott Stiles, agricultural economist for the Division of Agriculture, said payouts through PLC and other plans will likely not be available until the fourth quarter of 2016 because payout amounts hinge partly on marketing year average prices that the USDA won’t publish until October.

Gus Lorenz, extension entomologist for the Division of Agriculture, emphasized the need to control input costs without skimping on necessary pest management and fertilization efforts. He also said that growers should scout their fields regularly and only treat fields for pests that are actually present, rather than spending money to manage pests they simply assume will be there.

“We saw that in the past couple of years, growers are trying to find ways to cut costs,” Lorenz said. “Insecticide seed treatments is not one of them, in my experience.”

Ford Baldwin, a farming consultant and former extension weed science specialist, said that although many of the growers he had met with over the past year were naturally concerned about feeling the squeeze between production costs and commodity prices, most were used to riding out tough times.

“It doesn’t take a lot of things to change things around dramatically,” Baldwin said. “It seems like a lot of times, our farmers end up hitting a home run after our crop is already in the ground.”

To see a current schedule for upcoming production meetings throughout Arkansas, visit http://uaex.uada.edu/farm-ranch/crops-commercial-horticulture/ag-tech-calendar.aspx.

For more information on farming recommendations across the state, contact your local extension agent or visit http://www.uaex.uada.edu/.