Faculty, staff accomplishments recognized by U of A System Division of Agriculture, Bumpers College
skip to main content
News - 2016

Faculty, staff accomplishments recognized by U of A System Division of Agriculture, Bumpers College

FERNDALE, Ark. – Leadership in the national cotton industry and in-depth examination of the 2014 Farm Bill are among the accomplishments by faculty and staff who were honored Friday by the University of Arkansas System Division of Agriculture in partnership with the UA Dale Bumpers College of Agricultural, Food and Life Sciences. Ceremonies were held during a ceremony at the 4-H Center in Ferndale.

“We are exceptionally proud of the work performed each year by our personnel in diverse disciplines and functions,” said Mark Cochran, U of A System Vice President for Agriculture. ”The efforts of these individuals strengthen agriculture, communities and families by connecting trusted research to the adoption of best practices." 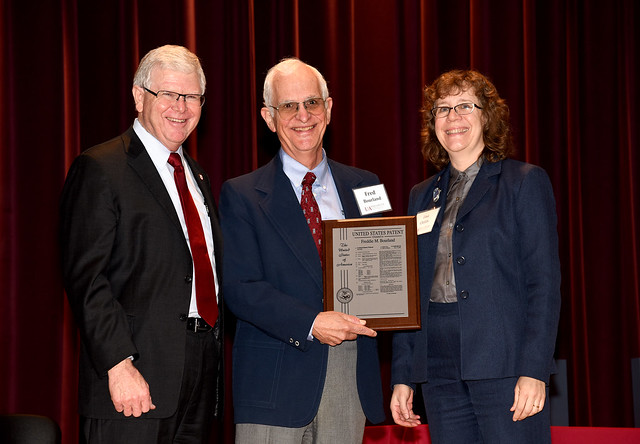 Fred Bourland is recognized for his patent on cotton cultivar UA222. (U of A System Division of Agriculture photo by Fred Miller)

The award recipients represent some 1,200 faculty and staff members on five university campuses, at research and extension centers and stations throughout Arkansas and at Cooperative Extension Service offices in all 75 counties.

The Division of Agriculture includes the Cooperative Extension Service and the Arkansas Agricultural Experiment Station. In addition to conducting research and delivering information and educational services on agriculture and forestry, it also promotes public health and nutrition; opportunities for youth, families and communities; safe and secure food systems; and environmental sustainability.

The Robert G.F. and Hazel Taylor Spitze Land Grant University Faculty Award for Excellence was presented to Fred Bourland, director of the Northeast Research and Extension Center. Bourland has become recognized as a leader in the national cotton industry during his service as director since 1997. In 2010, he was the first U.S. citizen to be recognized as the International Cotton Researcher of the Year. Industry leaders at Cotton Incorporated and the National Cotton Council sponsored his nomination for this prestigious international award. In 2015, he was inducted into Cotton Research and Promotion Program Hall of Fame – only the second public cotton researcher to receive this honor.

Jamie Baum, assistant professor of food science, received the Bumpers College Alumni Society Outstanding Advising Award. Baum has served as an advisor to both the Food Science Club and individual students. As the club’s advisor she has worked to make sure the students have access to the resources they need and has served as their voice when they need an advocate. All the undergraduates she has mentored have received research grants and many of them have presented their work at conferences and have been recognized by professional organizations. Baum also received the university’s Outstanding Mentor Award in both 2014 and 2015.

The Jack G. Justus Award for Teaching Excellence was presented to Michael Thomsen, professor of agricultural economics and agribusiness. Thomsen coordinates the undergraduate program and plays a key role in assuring that the department’s curriculum is coherent, accessible and relevant to the needs of students preparing for agribusiness careers. His Food and Agricultural Marketing course has grown in 10 years from under 30 students to more than 100. He developed the Agribusiness Strategy course shortly after joining the faculty in 1999. The course is now a key component of the M.S. program and is a popular elective for students in the thesis program who want to know more about business and industry economics. Thomsen also received the Bumpers College Alumni Society Outstanding Advising Award in 2009 and the Arkansas Chapter Gamma Sigma Delta Teaching Award of Merit in 2013.

The John W. White Outstanding Teaching Award, jointly awarded by the Division of Agriculture and Bumpers College, was presented to Andrew McKenzie, professor of agricultural economics and agribusiness. McKenzie has established a premier grain marketing program in the department. A sequence of three courses emphasizes real world risk management skills used by grain industry firms. The series allows students to earn an industry-recognized professional qualification. McKenzie has received six outstanding teaching awards, including the prestigious Southern Agricultural Economics Association: Outstanding Teaching of a Course Award in 2008, which singles out the most outstanding agribusiness teacher in the South.

Karl VanDevender, professor and extension engineer in the Department of Biological and Agricultural Engineering, received the John W. White Outstanding Extension State Faculty Award. VanDevender has been active in several significant projects in recent years, including answering complicated questions related to the Buffalo River swine farm, engaging in the engineering aspects of the Division of Agriculture’s Arkansas Discovery Farms and participating in National Pork Producers programs related to waste management and utilization. VanDevender also carries state extension obligations targeting swine producers and develops educational material for the Farm Bureau’s Ag in the Classroom program. He has been a national leader in providing training to livestock producers to successfully implement new environmental regulations.

A Division of Agriculture Non-Classified Support Personnel Award went to Chris Meux, a design specialist in Division of Agriculture Communications. Meux has demonstrated an eye for effective and high-impact visual communication that goes into the hundreds of pieces he creates every year, whether it’s a handout or poster for a county initiative, a piece designed for administrative use, or a promotional program. He has also worked with agricultural engineers to create distinctive, yet clearly branded, icons for Division-developed apps. In 2014 he was named Extension’s first Employee of the Year. This year, he won national awards from the National Association of Community Development Professionals and the National Association of County Agricultural Agents for two separate projects.

Kenny Simon, a forage program associate in the Department of Animal Science, also received a Division of Agriculture Non-Classified Support Personnel Award. Simon manages the 300 Days of Grazing program, a program that has helped producers in 50 counties save more than $300,000. Simon has organized four farm tours of producers, extension specialists and county agents from other states to talk with Arkansas producers about the impact of the program. He and his family were recognized as the Faulkner County Farm family of the Year in 2011. His efforts have been recognized with awards including the 2012 AACES Gary Burke Award, the 2013 John White Outstanding Team Award and the 2013 Extension Excellence Issue Team Award-Drought Management Team.

The Agricultural Experiment Station Classified Support Personnel Award was presented to Billy Palmer, a skilled tradesman at the Northeast Research and Extension Center, where he began working in 2005, first as a farm maintenance mechanic and then as an auto/diesel mechanic. In that time he has proven himself to be a valuable worker who is able to perform several tasks. He brought to the job more than 25 years of previous experience with farm equipment, automobiles, carpentry and plumbing. He is also able to repair unusual and frequently complicated research equipment, laboratory tools, buildings and greenhouse facilities. The Cooperative Extension Service Classified Support Personnel Award went to Christa Littlefield, administrative support supervisor at the Franklin County extension office in Ozark. She joined the Cooperative Extension Service in 1992 as a temporary secretary. She is known to her colleagues and supervisors as someone with outstanding creative skills and a people-oriented attitude. She monitors the budget closely and keeps the office’s county depository account up to date. Littlefield also is willing to volunteer time to help at 4-H activities and other events involving extension staff. She also volunteers several hours a year at the county fair and livestock shows.

The Division also recognized several faculty for patents that were issued on their projects. The faculty and their patented projects are:

•  Compositions and Methods of Enhancing Immune Responses to Eimeria