By Ryan McGeeney
U of A System Division of Agriculture
Feb. 26, 2016

LITTLE ROCK — About a dozen Arkansas 4-H members joined about 1,000 students from around the state Friday morning at the second annual Arkansas STEM Festival, organized by the LISA Academy of Little Rock. 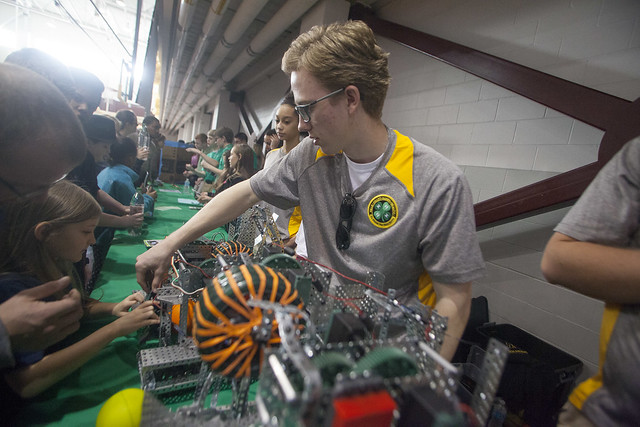 The event took place at the Donaghey Student Center on the University of Arkansas at Little Rock, featuring science projects intended to highlight the academic areas of science, technology, engineering and math. Rick Fields, 4-H Science and Curriculum Coordinator for the University of Arkansas System Division of Agriculture, said the festival was designed to be a state-wide celebration of science.

“It gives them a platform to exhibit what they’re doing as 4-H’ers in science, and it gives them an opportunity to get out and experience what their peers are doing, as far as science and discovery throughout the state,” Fields said.

Members of the Craighead County 4-H Robotics Club manned one exhibit, while other 4-H’ers from Faulkner and Pulaski counties exhibited projects that can be found in 4-H science kits used throughout the state.

Rhett Bryant of Jonesboro, 17, attended the festival as a member of the Craighead County 4-H Robotics club. He and other members explained and demonstrated a Bluetooth-controlled robot that Bryant said it took them about five months to engineer and construct.

Fields, who began his current position in October 2015, said 4-H’s participation in the fair also gave the broader public an opportunity to learn about the organization’s efforts to educate members in the sciences.

“It allows 4-H to ‘get on the map,’ and explore different avenues for science that we haven’t traditionally tapped for publicity,” Fields said. “I just want us to be more visible within these different avenues so that schools will know who we are and what our involvement is in science, so that we can build future collaborations."