FAYETTEVILLE, Ark. – Success in the Field, an e-book published by the University of Arkansas System Division of Agriculture detailing the accomplishments of the second phase of the National Strawberry Sustainability Initiative in 2014-15, has been recognized as the outstanding research/extension publication by a professional organization. 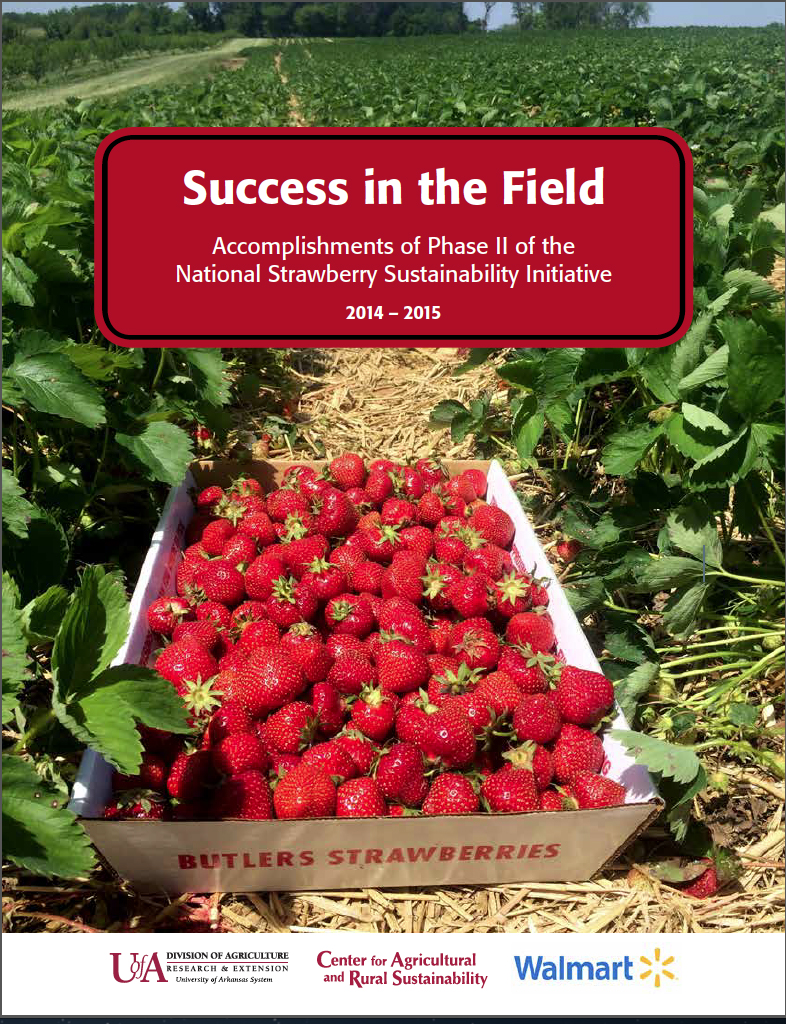 Cover of "Success in the Field."

The Southern Region of the American Society for Horticultural Science awarded a blue ribbon to the publication, the second consecutive year the NSSI has received the honor. A year earlier, the NSSI e-book Moving the Needle, which presented the program’s accomplishments in 2013-14, earned the group’s recognition.

The e-book covers the second phase of the National Strawberry Sustainability Initiative, which began in 2013 as a public-private partnership. The NSSI was comprised of 26 projects in 13 states with the support of $4.05 million in grants from the Walmart Foundation. Additional grants leveraged another $2 million in funds for the project. The program was managed nationally by the Center for Agricultural and Rural Sustainability of the Division of Agriculture.

“The NSSI is a nationally recognized project that has brought significant acclaim to the Center for Agricultural and Rural Sustainability,” said Curt Rom, a Division of Agriculture horticulture professor who directed the strawberry initiative. “The team and the accomplishments of this project are outstanding. I want to congratulate all of my teammates on this publication and the award recognizing their efforts. This project demonstrates the power of public-private partnerships in moving sustainable agriculture forward for the benefit of both farmers and consumers ”

Since the NSSI began, its efforts have reached 6,805 strawberry growers around the nation, largely through 38 workshops, 169 presentations and 106 publications. It also sponsored 49 field days and 117 on-farm trials bringing 1,250 acres of strawberries under new or improved management. Through multiple methods, NSSI estimates that it reached more than 4.2 million people nationwide.

Heather Friedrich, NSSI program manager, and Luke Freeman, NSSI communications specialist, served as editors of the e-book, which was designed by Judy Howard, a graphic designer for the Division of Agriculture.

A PDF of the 36-page e-book is available for free downloading at http://strawberry.uark.edu/NSSIphase2.pdf.

For Phase II of the initiative, which began in 2014, a total of $845,500 in funds was distributed to projects in Florida, North Carolina, Maryland, New Jersey, Arkansas and Texas. The Phase II projects included testing of new strawberry cultivars, sustainable soil management, the expansion of organic strawberry production, community engagement though schools and gardens, season extension and pest exclusion using high tunnels and greenhouses, and implementing precision technology for water management and frost protection.

The program emphasized putting proven technology into practice and involved farmers in all aspects, from project planning to assisting with demonstrations to hosting workshops and field days. Forty-eight individual farms participated in the six projects as grower-collaborators with on-farm trials.