What the groundhog sees: Not so much winter or spring, but delicious looking things in your garden
skip to main content
News - 2016

What the groundhog sees: Not so much winter or spring, but delicious-looking things in your garden

LITTLE ROCK – Groundhogs have nationwide fame for their alleged ability to predict the coming of spring. However, their presence in your yard will predict whether you – or them -- will get to enjoy the fruits of your gardening labors.

“Groundhogs can be entertaining unless they live near your garden,” said Becky McPeake, extension wildlife special for the University of Arkansas System Division of Agriculture and the Arkansas Forest Resources Center. 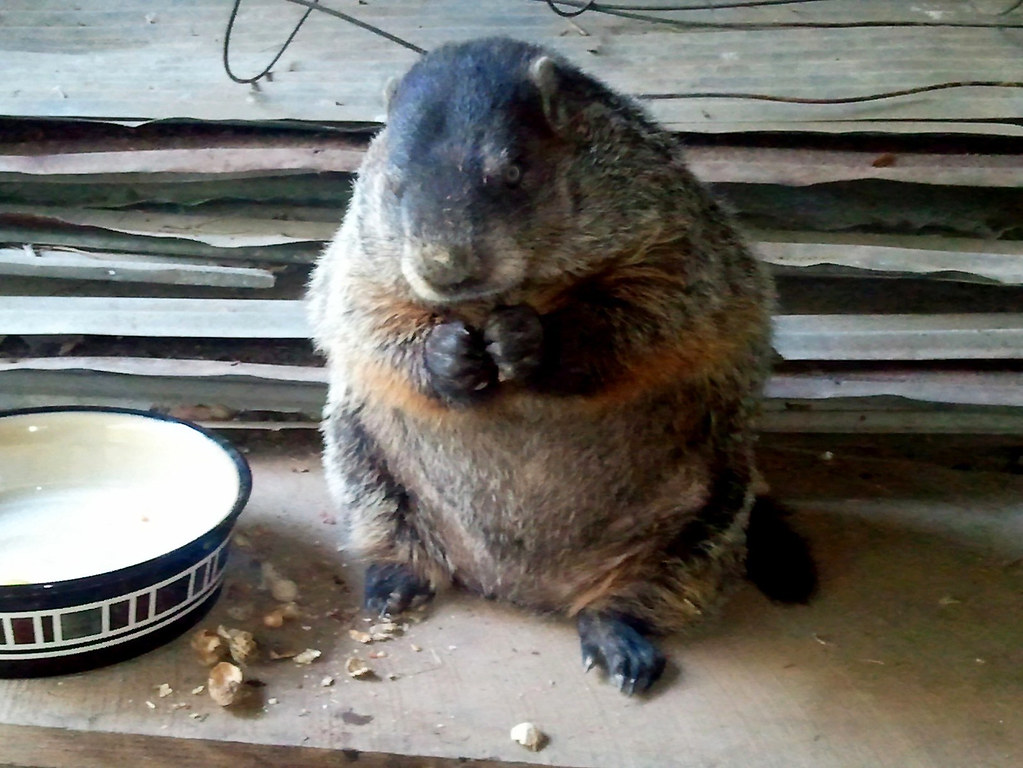 LOVES PEANUTS -- Blossom the groundhog chows down on peanuts left for her by humans trying to keep her out of the garden. (Image courtesy Tamara Walkingstick)

Also called whistlepigs and land beavers, groundhogs keep winter and summer dens, and may hibernate from November to January or early February. They’re rarely seen in the Arkansas Delta or southeast Arkansas, but common elsewhere.

“The Groundhog Day lore may come from their emergence from the winter’s hibernation,” she said, adding that historians believe the holiday began with a German tradition involving a badger.

“The badger peeps out of his hole on Candlemas Day,
and, if he finds snow, walks abroad;
but if he sees the sun shining he draws back into his hole.”

Once the tradition was imported to the U.S., the groundhog subbed for the badger.

Females usually have only one litter a year. Though they can live 8 to 10 years in captivity, they are believed to survive 4 to 5 years in the wild.

“Groundhogs are vegetarians and typically eat grasses, legumes, clover, and green herbivory,” she said. “They will also take advantage of green beans, tomatoes, and other garden fare.”

McPeake warns if you want to keep your garden, “you basically need to build Fort Knox to keep them out.”

Speaking from experience, “there is almost nothing that will stop a determined and hungry groundhog,” said Tamara Walkingstick, associate director of the Arkansas Forest Resources Center. Walkingstick has seen her share of tomatoes, corn and squash, pea, melon and sweet potato vines disappear from her home vegetable garden, despite a variety of deterrents. “Liquid fence, that stinky stuff, worked after a couple of applications, but only because there was no other food available for her to eat.”

McPeake suggests starting with a fence at least three feet high made of heavy poultry wire. – “they’re surprisingly good climbers.” Bury the fence 10 to 12 inches to keep them from burrowing under, or bury the fence 2 inches or more underground bent in an L-angle facing outward. Bend the top 15 inches of the wire outward at a 45-degree angle to keep them from climbing over.

Studies have found bobcat urine to be an effective groundhog repellent and can be found online and at trapper suppliers.

“However, bobcat urine will probably also attract bobcats, so keep that in mind before deploying this around your property,” she said.

McPeake said trap-and-release is also an option and having a large trap – such as one sized for large raccoons -- since groundhogs can get in to the 30-pound range when preparing for hibernation. Use apples or garden vegetables as bait.

The Arkansas Game and Fish requires identification on traps such as name, address, and phone number be affixed to the trap, and that the animal be released outside municipalities’ boundaries within 24 hours of capture.

“Groundhogs can be active at any time, though typically early morning and late evening, so check your trap frequently,” she said.

As members of the rodent family along with squirrels and rabbits, Walkingstick cautions that groundhogs may look cuddly, “but these are large, wild animals and very capable of defending themselves. They are not cute little docile things that we seem to think they are.”

For more information on wildlife, contact your county extension office or visit www.uaex.uada.edu. See also “Dealing with Wildlife,” at http://uaex.uada.edu/environment-nature/wildlife/dealing-with-wildlife/.