By Mary Hightower
U of A System Division of Agriculture
Dec. 21, 2016

LITTLE ROCK –  The impacts of a 2016 growing season that may have cost crop farmers up to $50 million in losses due to wet weather, plus the pressures of lower commodity prices, may prompt changes in Arkansas’ row crop landscape for 2017, said extension faculty from the University of Arkansas System Division of Agriculture. Neither was the livestock side of farming immune to dark clouds. 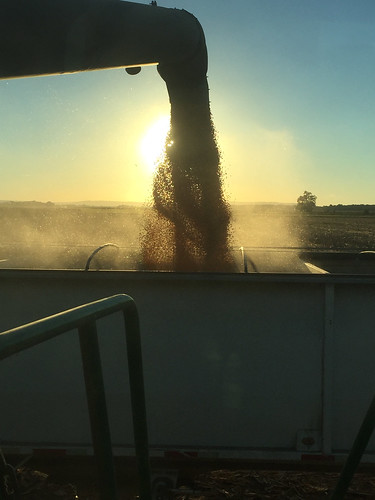 “In the last two years, cattle markets have gone from record highs to dismal lows,” said Mike Looper, department head-Animal Science for the Division of Agriculture. “In 2016, beef production expanded nearly 6 percent and is projected to increase an additional 4 percent again in to the next year. Record beef output means lower prices moving into 2017.

“While these scenarios seem to be more ‘doom and gloom,' there are opportunities,” he said. “Obviously, an increased export market would alleviate the surplus beef production, but that is yet to be seen.

Looper said that during these major beef market transitions, producers may want to consider increasing the value of calves through backgrounding.

“With adequate moisture, forage production can add additional pounds with marginal costs,” he said. “Some economists suggest retained ownership of calves through the feedyard phase also may increase profits. It seems transitional times in any industry usually result in better management strategies.”

For row and field crop growers, the 2016 growing season was wet almost from the start.  However, heavy, sustained rain from Aug. 13-20 is estimated to have cost Arkansas row crop farmers $40-50 million, according to a study done by Division of Agriculture economists.

The rain wasn’t picky about which crops were damaged. Many farmers saw submerged crops, sprouting of grain in the heads and in cotton, the dropping of bolls.

CORN — Jason Kelley, extension wheat and feed grains agronomist for the division, said “Acreage was up significantly in 2016 -- up 300,000 from last year – and overall corn yields were average compared to the last three years when record yields were realized.”

The state average yield was estimated at 178 bushels per acre, which was down from 2105. Kelley said warm temperatures during June and July were most likely the culprit for lower yields this year.

“Decisions are still being made for 2017, but corn will be in the mix for many producers and final acres will depend on price swings over the next few months,” he said.

COTTON — The National Agricultural Statistics Service November Crop Production report estimated production at 830,000 bales, which was down 20,000 bales from the Oct.1 forecast but up 359,000 bales above last year. Yield is expected to average 1,062 pounds per harvested acre, down 26 pounds from October’s estimate and down 30 pounds from 2015 and below our five-year average of 1073 pounds of lint per acre. Harvested acreage is estimated at 375,000 acres, up 168,000 acres from 2015.

“The 2016 crop was disappointing for most,” said Bill Robertson, extension cotton agronomist for the Division of Agriculture. “Some of our better cotton picked three bales but there wasn’t much in terms of four-bale fields. We finished the season just under our five-year average.  However, average yields will not pay the bills.”

Robertson said, “we had a rough start at the beginning of the season, very slow at the starting line. Wet weather and seedling disease in May was widespread. Once we reached June, the plants tended to grow off and the crop looked a lot better. When August arrived, we were on track for a record yield until the rainy, cloudy weather that persisted from around Aug. 13 to Aug. 22 occurred.

GRAIN SORGHUM — Kelley had two words to describe 2016 for grain sorghum growers: “Tough year. Acreage was down approximately 10 times from 2015,” he said. “Lower grain prices, in addition to sugarcane aphid threat, were a deterrent to planting grain sorghum this year.

PEANUTS — Travis Faske, extension plant pathologist and the Division of Agriculture’s go-to specialist for peanuts, said “the season started out great with adequate moisture and warm temperatures for peanut production. The wet, cloudy weather in August was less than ideal and was the cause for some fields to have a lower grade than expected.”

Faske said that even though the final numbers are still pending, overall yield was slightly less than average. “I would guess an average of 4,000 pounds per acre, and grades were slightly less, but this is still respectable yield.”

“Contracts are higher for next year with $425 to $450 per ton in some areas and this will probably go up before next year,” he said. “I expect slightly more production next year, maybe near 25,000 in Arkansas.”

RICE — “The 2016 rice season brought a significant decrease in state average yield, at 159 bushels per acre, compared to the 163-168 bushels per acre we saw in 2013-2015,” said Jarrod Hardke, rice agronomist for the University of Arkansas System Division of Agriculture.

“Lower production combined with decreasing rice prices have left many with serious questions about planting decisions entering 2017,” he said. “At this point all signs point to a significant reduction in rice acreage compared to the 2016 acreage of 1.52 million acres.”

Hardke said he expects total rice acres to decline around 1.1 to 1.2 million acres in 2017. Long grain rice acres will see the largest decline, however “medium acres should actually increase,” he said, adding that “depending upon any changes in commodity prices of rice and related rotational crops such as soybean, this estimate is open to change.

“If soybean prices begin to fall there is a likelihood of an increase in rice acres in response,” Hardke said. “However, any potential reduction in soybean commodity prices may not occur in time to affect planting decisions for the 2017 season, if a reduction occurs at all.”

Jeremy Ross, extension soybean agronomist with the Division of Agriculture, said his biggest concern for the 2017 growing season for soybean will be the adaption of Monsanto’s new Xtend technology.

“I’m already hearing some producers going 100 percent Xtend soybean varieties next year, but we only have yield data and disease rating for these varieties for only one year,” he said. “It concerns me to plant a large portion of our acreage to varieties with limited data.”

WINTER WHEAT — A dry fall gave the opportunity to plant wheat, but Kelley said that “low grain prices coupled with concerns about profitability, and lack of soil moisture during the optimum planting window of October limited planted wheat acres. Estimated wheat plantings will be released in January, but acreage will likely be near the lowest acreage in recent history.”