By Mary Hightower
U of A System Division of Agriculture
Dec. 2, 2016

LITTLE ROCK — An invasive beetle carrying an invasive disease is a threat to the tree whose leaves provide gumbo’s filé and whose below-ground parts provide the unique bite to root beer. 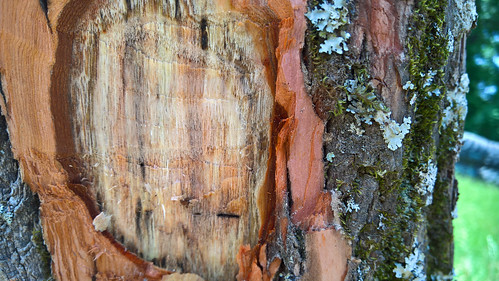 The disease can attack all members of the laurel family, and in Arkansas, that includes sassafras and redbay trees, as well as spicebush and pondberry shrubs.

“The laurel wilt fungus and its carrier, the redbay ambrosia beetle, were first discovered in Arkansas in late 2015,” said Tamara Walkingstick, associate director of the Arkansas Forest Resources Center and an extension forester for the University of Arkansas System Division of Agriculture.

Walkingstick said that as of August 2016, the disease was confirmed in two Arkansas counties --- Cleveland and Bradley, “and we’re expecting to see that number increase as forestry officials continue to search for both the disease and its beetle.”

The beetle was first identified near Savannah, Georgia, in 2002 and soon after, the disease was found in declining redbay trees.

Symptoms of laurel wilt include:

If those two symptoms are present, peel some bark from the tree. There may be small galleries cut into the sapwood by the beetles and the sapwood may have a dark stain, indicating fungal infection.

To learn more about the symptoms of laurel wilt, download the fact sheet “Laurel Wilt: An Invasive Pest of Sassafras in Arkansas,” at http://www.uaex.uada.edu/publications/pdf/FSA-5033.pdf

Contact your county extension office or visit www.uaex.uada.edu to learn more about landscape and forestry issues.