FAYETTEVILLE, Ark. — A solid week of rain has caused grain sorghum to sprout in the head in many Arkansas fields, causing some grain to be rejected by buyers or sold at discount prices.

Jason Kelley, wheat and feed grains extension agronomist for the University of Arkansas System Division of Agriculture, said early planted fields — those planted from April through mid-May — are seeing the most damage. He said that accounts for about 80 percent of Arkansas grain sorghum fields.

“Some areas of the state had eight days of rain around the week of Aug. 15 with no drying weather,” Kelley said. “The closer the grain was to harvest, the more likely it sprouted.”

“Many Arkansas grain sorghum growers would have started harvesting last week on early planted fields, so the timing of that rain was unfortunate,” Kelley said. 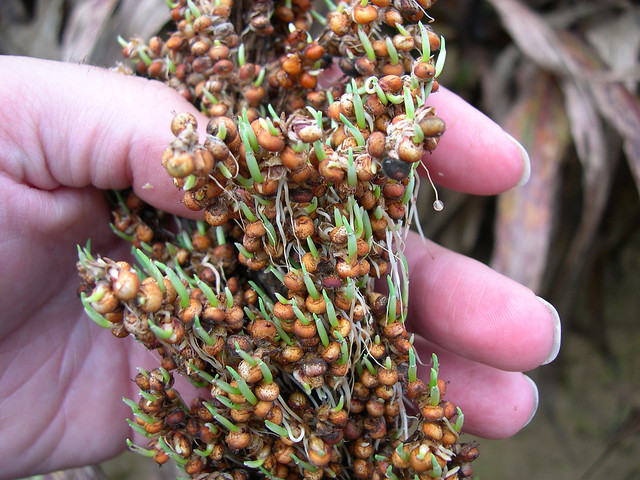 SPROUTS — In wet conditions, sorghum close to harvest can sprout. 2009 file photo. (U of A System Division of Agriculture image)

The Arkansas Agricultural Statistics Service reported Aug. 15 that only about 1 percent of the state’s grain sorghum crop had been harvested. A lot of mature grain was still in the field when the rains started because grain moistures were too high to harvest, Kelley said.

A majority of Arkansas’ grain sorghum is exported, especially in the areas closes to Memphis and Helena, Kelley said. It is shipped down the Mississippi in barges and the grain must be down to 14 percent or less moisture content.

If damaged kernels, including sprout damage, are greater than 15 percent of the total when sampled, it will be classified as poor quality, Kelley said. When that happens, the grain price is discounted heavily or the grain is rejected.

“And that’s what we’re seeing this week,” Kelley said. “Some buyers are rejecting the grain. Others are buying at a discount.”

Growers may be able to lower risk by spreading out planting dates so that all of their sorghum is not mature at the same time, Kelley said. But most want to plant early to accommodate harvest schedules with other crops and early planting typically gives the highest yields.

In the meantime, Kelley recommended harvesting as soon as feasible, once grain moisture drops to a harvestable level, in order to prevent further reductions in grain quality or loss from shattering.

More information about grain sorghum and other crops can be found online in the weekly Arkansas Row Crop Report: http://www.arkansascrops.com/