Is cross-laminate timber a good fit for Arkansas forestry?

By Ryan McGeeney
U of A System Division of Agriculture
Aug. 25, 2016

LITTLE ROCK — Architecture and design experts with the U of A Fay Jones School of Architecture recently met with timber and forestry experts for a day-long conference intended to examine the feasibility of adopting a new timber technology that produces structural wood products approaching the strength of steel. 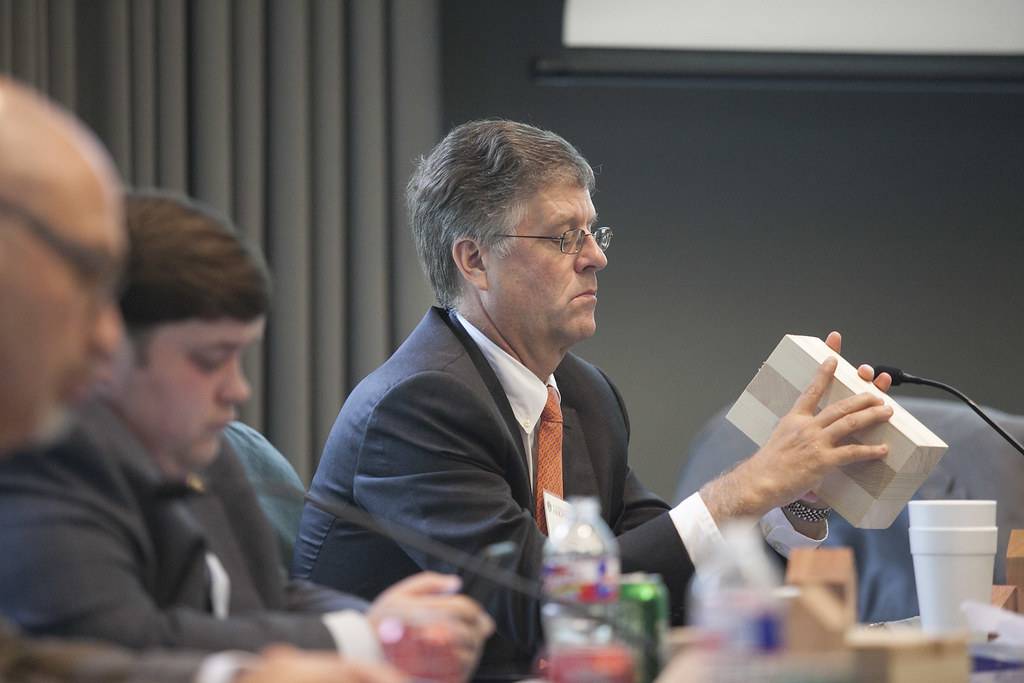 Cross-laminate timber, commonly referred to as CLT, is a manufacturing technique which combines layers of timber, cut to common dimensions such as 2’x6’, into extremely strong finished materials that can be used in flooring, exterior walls and other building applications.

The “Innovate Arkansas” conference, held Aug. 19 at the U of A Systems offices in Little Rock, was a combined effort on the part of the U of A Fay Jones School of Architecture and Design, the School of Forestry and Natural Resources at Monticello and the Arkansas Forestry Resources Center. About 80 individuals involved in the fields of architecture, engineering, building and forestry attended.

Philip Tappe, director of Forest Resources for the University of Arkansas System Division of Agriculture, said architects and engineers within the university system had initially ignited interest in making CLT a more viable construction material in the region.

“They’re really interested in getting a new industry in the state to produce cross-laminated timbers,” Tappe said. “And we’re certainly supportive of it, but our mission for this meeting was to inform all the attendees about the forest resources that are available in Arkansas, and its current status.

“Right now in Arkansas, we’ve got about 19 million forested acres,” Tappe said. “We’ve added 571 million tons of standing timber, about a 57 percent increase, over the last four decades. We’re growing about 72 tons a minute of timber in our forests, and it’s resulting in a surplus of about 15 million tons per year.”

Tappe said much of the forested area throughout the state is approaching a density that is unsafe due to the increased risk of forest fires, pests and other dangers.

Tappe said the chief obstacle to enticing a private enterprise to establishing a CLT manufacturing facility in Arkansas is the unknown amount of demand for the finished product in the wider construction market.

Pete Kobelt, a construction consultant who has worked extensively with CLT materials, told conference attendees that it would cost about $20 million to establish a 30,000 cubic meter CLT manufacturing facility, capable of processing about 12 million board feet of timber a year, in Arkansas and to “do it right.”

“Is that a lot of money?” Kobelt asked. “Yeah. Is that a lot of money in the big picture, to change the world? No. It’s a business model that probably generates about three-quarters of a million dollars a month, on a pretty good margin, although that depends on how well you can work with your supply chain partners, and how well you can vertically integrate with a saw mill and some of the other variables.”

Kobelt said that while the use of CLT materials has been popular in European countries for decades, builders in the United States have been comparatively slow to adopt the technology.

“In thinking about this industry, I realized that there are a lot of good things going on in Europe that we need to find a way to bring to the United States,” Kobelt said.  He compared the state of Montana with Germany, each of which has approximately the same number of trees.

Arkansas Governor Asa Hutchinson, who welcomed the conference attendees, reminded the crowd that the state’s adoption of new technologies in all sectors of the economy was key to its continued growth.

“Every part of our economy is impacted by technology,” he said. “But it’s the diversity of the economy that is critical to our state.”