By Olivia McClure
U of A System Division of Agriculture
Aug. 24, 2016

LITTLE ROCK – This earlier this month, Mary Alice Cole, received the news of a lifetime, she would serve as Arkansas' 2016-2017 state 4-H president – the first Izard Countian to be elected to the post. 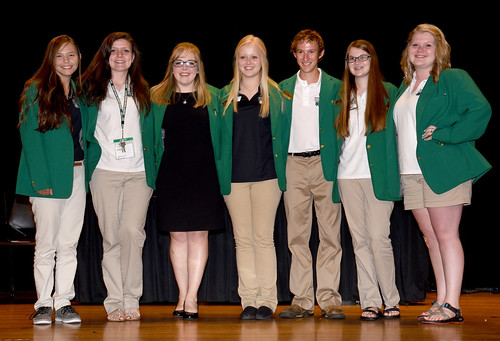 Cole previously served as one of the 2015-2016 Arkansas 4-H State Officers-at-Large. She said she learned what it takes to serve as the state president by watching fellow state officer and outgoing president, Travis Clark, through 2015-2016 year.

“I am so honored to have been given the opportunity to serve Arkansas 4-H this year as president,” Cole said. “Throughout this year I hope to be able to reach and inspire 4-Her's all across the state. I can not wait to grow as a 4-Her through this year!"

Cole started in 4-H six years ago with the poultry chain project, not knowing what all to expect. She has spent the next years showing livestock at various events, doing community service, counseling county and state camps, talked to various organizations about what 4-H offers, and has traveled all across the nation.

The last 4-H state officer to come from Izard County was elected in 1959. Cole said she is honored to represent not only her county but also Arkansas 4-H as well.

Cole will be attending Southern Arkansas University this fall, with plans to major in Animal Science and a minor in Digital Photography and Film.

Cole will be serving with these state officers at large: Cheyenne Gilliam from Independence County, Sara Toll from Prairie County, and Lane Fritch from Benton County.

The State 4-H Officer adviser Angie Freel, an instructor with the University of Arkansas System Division of Agriculture, said she is “looking forward to my second year as state 4-H adviser, and watching them grow and develop into the leaders I know they can be."

Throughout this year the State Officers will be planning, and facilitating different activities. The state officers will also represent Arkansas 4-H throughout the year at various events such as the Agriculture Hall of Fame.