By Gail Halleck
U of A System Division of Agriculture
Aug. 19, 2016

FAYETTEVILLE, Ark. — Any serious discussion of cotton in Arkansas will have to get around to mentioning Derrick Oosterhuis, probably sooner rather than later. 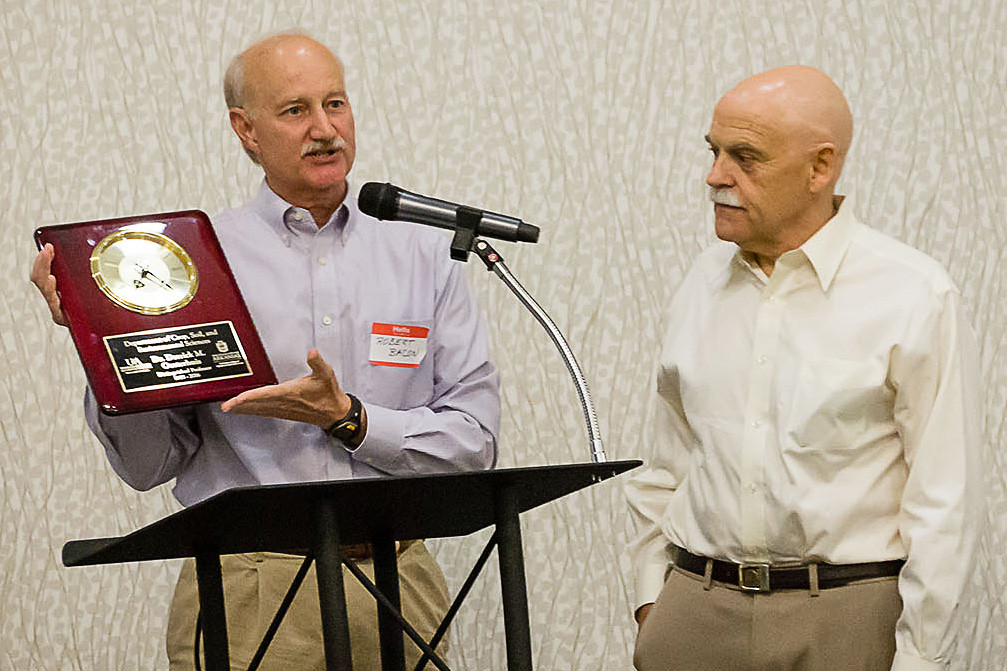 Oosterhuis retired this summer after 31 years as a professor of crop physiology for the University of Arkansas System Division of Agriculture and the Dale Bumpers College of Agricultural, Food and Life Sciences.

In a career that spanned 40 years and six continents, Oosterhuis has virtually written the book on cotton physiology — if not the whole book, at least 30 chapters, 185 refereed journal articles and more than 400 research papers presented at national and international meetings. He has also edited seven books on cotton research.

Robert Bacon, head of the department of crop, soil and environmental sciences, said, “Derrick’s accomplishments have given much visibility to our department, college, division, and the university. He has been an innovative researcher and prolific writer.”

Bacon noted that Oosterhuis contributed greatly to the science of cotton.

“His worked has added much to our understanding of heat and drought stress in cotton and he has been a leader in the field of foliar nutrition as well as many other areas,” Bacon said.

“Derrick is also a skilled and caring teacher,” Bacon said. “He is full of enthusiasm to pass on his love of science to his students.”

His enthusiasm to train the next generation of scientists also led him to work with high school students on science fair projects over the years. Most recently, he guided a high school team working on a germination study in space for NASA.

One of Oosterhuis’ former graduate students, Tyson Raper, spoke during a retirement reception in June of how much he learned from Dr. Oosterhuis.

Raper, now an assistant professor at the University of Tennessee, said he valued how Oosterhuis treated him more as a colleague than a graduate student.

Oosterhuis’ doesn’t aim to become idle in retirement. After traveling during the summer, he is returning this fall to teach a class. After that, he plans to accompany his last graduate student to South Africa to conduct some field measurements.

Next March, Oosterhuis is planning a trip to The Galápagos Islands.