By Ryan McGeeney
U of A System Division of Agriculture
Aug. 19, 2016 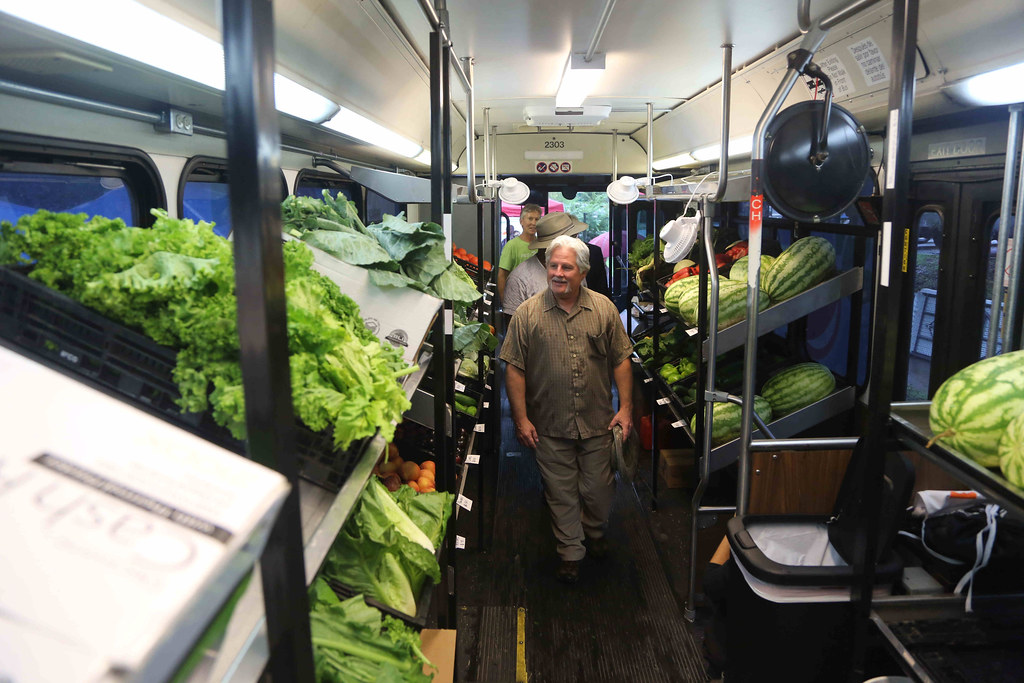 A food desert is defined as an area in which fresh, healthy food choices are not easily accessible. This often means that no grocery stores are within walking or even short driving distance; it can also apply to areas that are home to specific, at-risk populations, such as the elderly. Arkansas ranks number one in food insecurity among seniors, according to the U.S. Department of Agriculture.

Currently, the mobile market is scheduled to visit the Parris Towers complex from 10 a.m. until noon each Tuesday, and the Hillary Rodham Clinton Children’s Library & Learning Center from 9-11 a.m. Saturdays.

Nancy Conley, spokesman for the Arkansas Hunger Relief Alliance, said the organization plans to add an additional stop at Parris Towers from 1-2:30 on Tuesdays.

Conley said that all the produce being offered in the mobile market comes from Raising Arkansas, an alliance of small-scale, mostly minority farmers in Central Arkansas.

Bobby Pettis, president of Raising Arkansas, said the coalition between his organization and the Arkansas Hunger Relief Alliance offered a unique opportunity for small farmers to reach new markets.

Ron Rainey, extension economist for the University of Arkansas System Division of Agriculture, said he had been working with both the Arkansas Hunger Relief Alliance and Raising Arkansas in understanding and developing new market opportunities to connect growers with consumers.

Michelle Shope, director of resources and logistics for the Arkansas Hunger Relief Alliance, said the bus, which was retired from the Little Rock Metro’s fleet a few years ago, was donated by the city and retrofitted over the course of about six months. The cost of the retrofitting was paid for through a grant from the Blue & You Foundation.

Shope said she hopes to eventually expand the mobile market program to all of Pulaski County, and eventually to wherever similar services are needed in the state.

“We would like this program to be state-wide, focusing on food deserts,” Shope said. She said that in working with Raising Arkansas, the mobile market concept expanded small-scale farmers’ capacity for marketable production.

“Raising Arkansas works for small growers and historically disadvantaged growers to develop year-round growing,” she said. “That not only gets food to people in need, but also lift the grower by having year-round income.”

“This is so exciting to me, because we’re actually providing a solution to a real need, a real problem in our state,” Bledsoe said. “The folks that have gathered together all the various members of the coalition, they were able to find a need — these urban food deserts — then match that need with a resource — our local farmers, producing these great crops, great food, then solve this problem in a unique way with this mobile farmers market.

“That’s incredibly exciting,” he said. “And not just because of what it does in this microcosm, but because it provides a model for how we go out and solve bigger problems and issues all around the state.”