By Ryan McGeeney
U of A System Division of Agriculture
Aug. 17, 2016

LITTLE ROCK — Heavy rains throughout the state combined with high temperatures have begun to trigger instances of rice prematurely sprouting from panicles, a phenomenon that will likely result in milling and yield losses when harvest begins. 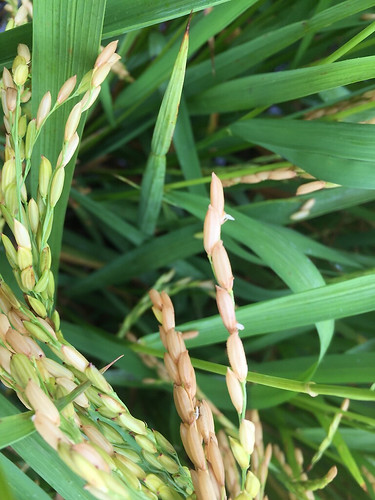 Jarrod Hardke, extension rice agronomist with the University of Arkansas System Division of Agriculture said Tuesday that he and other agronomists had received reports from Cooperative Extension Service agents in Clay, Lawrence, Randolph and other rice-heavy counties in the northeast corner of the state this week.

“It’s too early to know how widespread this is, because most growers aren’t out in their fields right now, given the rain,” Hardke said. “Once it lets up, though, and growers get out to look at the fields, I believe observations will increase. This is just the tip of the iceberg.”

Hardke said that the reports he had received as of Tuesday were from fields with relatively immature rice.

“If it’s happening there, it’s probably worse in fields where the rice is even further along in development, because the kernels will be closer to having harvestable levels of moisture,” he said.

“These are no longer viable kernels,” Hardke said. “If it makes it through a combine, producers will be docked by buyers for undesirable grain. If, for some reason, it doesn’t even make it that far, it’s just a direct yield loss.”

Heavy rainfall throughout the week had already impacted rice in Arkansas, largely bringing the young harvest to a halt. The National Weather Service reported average rainfall of 2-4 inches throughout much of the state over the weekend. As of Tuesday, the NWS forecast 1-3 additional inches falling across the southern two-thirds of Arkansas, as well as neighboring states.

Craig Allen, agricultural agent for the Poinsett County Cooperative Extension Service office, said nearly all fields in his county were too saturated to harvest as of Monday.

“It’s at a standstill right now,” Allen said. “The forecast shows rain through Saturday, so there’s a good chance it will be next Monday before anyone out here is back in the field.”

According to a report published Monday by the U.S. Department of Agriculture’s National Agricultural Statistics Service, 97 percent of Arkansas rice has headed — a significant jump over the five-year average for this point in the season. About 2 percent of the crop had been harvested, which is closer to typical.

Allen said the rain and humidity had also contributed to isolated instances of late-season diseases such as neck blast and sheath blight.

Hardke warned that if the continuing rains are joined by high winds during harvest, a portion of the state’s rice crop may become “lodged,” as heavy, harvest-ready crops collapse against each other under the weight of saturation.

“When heavy rains start to come in at an angle, driven by higher winds, it has a ‘push’ effect to it,” Hardke said. “It will start to push the crop over — if there are areas of the field that have weaker stems or straw, they’re going to have a tendency to lodge and go down. Once that starts, there’s usually a domino effect — the weight of the fallen rice leaning on the rest of the rice — eventually, it’ll break down the rest of it.”

The lodging phenomenon can be a routine occurrence in Arkansas rice fields, Hardke said, which sometimes puts growers in the difficult position of deciding when to cut losses on the harvest process itself.

“If the storm damage happens later in the season, and the crop lodges, but doesn’t actually get too flat or too wet, the main fear becomes wear and tear on the machines, just to pick up anywhere near the same amount of yield,” Hardke said. “It’s much more difficult and time-consuming to cut downed rice than standing rice. You have to drive the combine slower and cut at a lower height — you’re literally trying to pick it up to get it in the combine.”