HAZEN, Ark. – With daily rainfall since Friday, there’s been something else growing in Arkansas’ farm fields: water levels.

The heavy rain, unusual for August in Arkansas, comes at the cusp of harvest for the state’s spring-planted crops. Abundant rain presents a spectrum of challenges, not limited to miring combines and other farm vehicles in fields. Wind gusts can blow over crops, a condition called lodging. Lodging complicates harvest because it puts the ear or grain head in the wrong location for the combine to reach it. 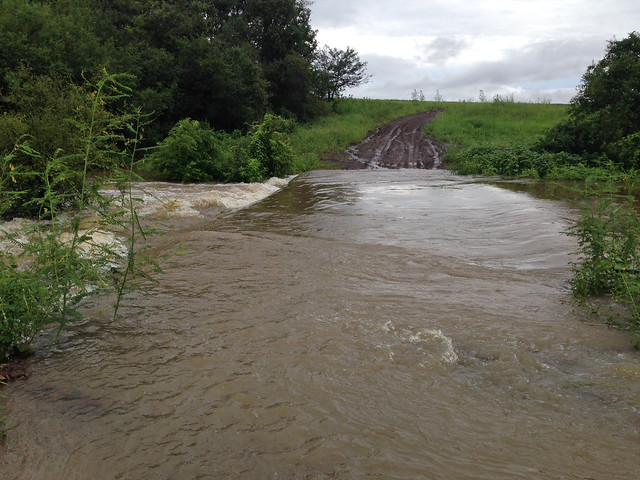 Moist conditions can encourage growth of fungus and diseases, and in the wet, the kernels in corn and grain in rice and sorghum can sprout.  Even if farmers are able to harvest, the moist grain they capture will need to be dried to reach levels acceptable by the grain elevators.

Farmers are hoping not to see a repeat of 2009, where a long stretch of wet weather was blamed for an estimated $397 million in crop losses. (See http://bit.ly/2bl1naj)

“Rainfall at this stage of the game is not helpful in any way for corn or grain sorghum,” said Jason Kelley, extension wheat and feed grains agronomist for the University of Arkansas System Division of Agriculture. “Most of the crop is mature and is ready to harvest as soon as the weather clears and grain moisture drops to a harvestable level.”

“In 2009 we had a very similar weather pattern that resulted in considerable sprout damage to our grain sorghum,” he said. “The question this year is whether the grain is mature enough to sprout now.

For crops not yet ready to harvest, the water can cause stress, said Brent Griffin, Prairie County extension staff chair for the University of Arkansas System Division of Agriculture “some soybean acreage is yellowing due to water standing” on the fields.

“Some corn is beginning to lodge and with exposed mature ears sprouting,” he said.

“If and when weather clears still will be seven to 10 days before any corn is harvested and delivered directly to grain terminals,” Griffin said. “Limited rice harvest will begin when the weather breaks, but we are still 10 to 14 days before widespread thrashing.

The old summertime adage in Arkansas that “we’re only two weeks from a drought,” doesn’t apply this year.

“I don’t think I have ever said that we need dry weather in August but we could use some this year,” said Keith Perkins, Lonoke County extension staff chair for the Division of Agriculture. “We need sunshine to finish this crop season, and time will tell the extent of damage to this year’s crop.”

In the Arkansas River Valley, the water is up, but Perry County Extension Agent Jesse Bocksnick said at least one grower has found the brighter side: “We’ve had one farmer say he’s welcomed the high water to drown some worms in the crops,” Bocksnick said. Still, the farmer worried that some soybeans in low-lying areas may be lost.

The National Agricultural Statistics Service report for the week ended Sunday said that Arkansas farmers had harvested 5 percent of corn, 2 percent of rice and 1 percent of sorghum.

To learn more about crop production in Arkansas, contact your county extension office or visit https://www.uaex.uada.edu.