(Newsrooms: Downloadable images of the entries may be found here: 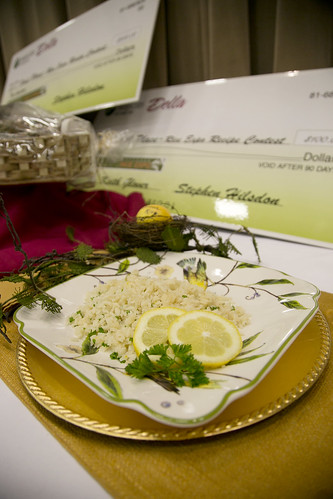 The competition also featured two youth contestants whose efforts landed them in the top five.

Feland’s recipe will be published in the 2017 Arkansas Rice Expo Recipe Book.

Sharpe told Bowen that, “I really enjoyed being there in the recipe contest and learning so much about rice. I was talking to Sharon Traylor and I told her that now I look at every recipe and think how it would be with rice added to it. She said she does the same thing!”

“Each year, the competition has become tougher,” said Dianna Bowen, Lonoke County extension agent for the University of Arkansas System Division of Agriculture, and contest chair “The recipes become more varied and subtle and the settings more fine-tuned. It was a great competition.”

This year’s contest was judged by Donna Bemis and Peggy Miller of the Arkansas State Women’s Committee, William Ginnochio, a culinary instructor at Pulaski Tech, and Pat Walker, meteorologist at KARK-TV. Their choice for first place was unanimous.

“I want to thank our judges for their time, effort and palates,” Bowen said. “This contest would not be possible without them.”

Wednesday was a pretty good day for Feland who also placed third in the Rice Expo tabletop centerpiece competition with an innovative display that included rice panicles, hulled grains and ceramic birds.

The University of Arkansas System Division of Agriculture is an equal opportunity/equal access/affirmative action institution. If you require a reasonable accommodation to participate or need materials in another format, please contact (rthrelf@uark.edu) as soon as possible. Dial 711 for Arkansas Relay.