(Newsrooms: Downloadable images of the entries may be found here:

STUTTGART, Ark. – A woman whose hometown is the city that bills itself as the Rice and Duck Capital of the World is the winner of this year’s Arkansas Rice Expo Tabletop Centerpiece competition. 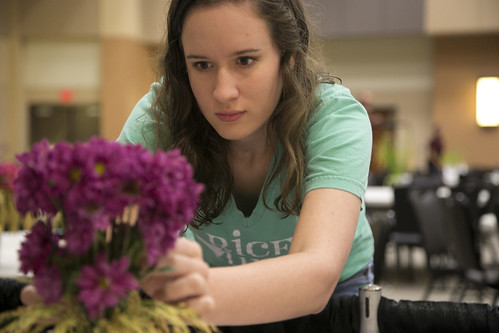 Holly Herald of Stuttgart won with her arrangement of orange Peruvian lilies, rice panicles and fresh corn cobs showing in a clear glass base.

“When I think of rice, harvest is the first thing that comes to my mind,” she wrote in her description of her entry. “We also farm corn … so I thought I would incorporate it into my arrangement.”

Last year’ winner, Laurie Benhase of Jacksonville, won second place from the judges and earned the People’s Choice honors. Her arrangement sat in a green ceramic vase with pale orange carnations, dried leaves and rice, all seated on a moss-covered corkboard disk.

Richard Klerk, Woodruff County extension agent for the University of Arkansas System Division of Agriculture, was competition organizer. He said there were 19 entries total.

Each of the winners received certificates to recognize their achievements along with rice gift baskets. The winner also received a rice cooker and the People’s Choice winner received a special Arkansas basket containing a variety of rice products.

After the winners were announced, all the entries were placed on the tables where attendees of the Rice Expo could observe them while they ate lunch.

The Rice Tabletop Centerpiece Contest is conducted to promote the many uses of rice and utilize the talents of Arkansans to create beautiful displays for the Rice Expo luncheon tables.

The University of Arkansas System Division of Agriculture is an equal opportunity/equal access/affirmative action institution. If you require a reasonable accommodation to participate or need materials in another format, please contact (rthrelf@uark.edu) as soon as possible. Dial 711 for Arkansas Relay.