How to celebrate National Catfish Month in Arkansas? Go fishing!

By Will Hehemann
UAPB School of Agriculture, Fisheries and Human Sciences
Aug. 12, 2016

PINE BLUFF, Ark. – August is National Catfish Month and beginning anglers can celebrate the occasion by fishing for the state’s native catfish species and learning how to prepare them, Scott Jones, Extension specialist at the University of Arkansas at Pine Bluff, said. 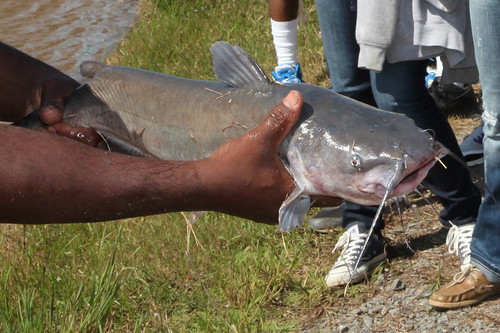 “Catfish are a staple of Southern cuisine and recreational fishing,” he said. “They are abundant in nearly all public waters in Arkansas, including lakes, rivers and streams, and are relatively easy to catch.”

Catfish have an excellent sense of smell, which can be exploited by anglers who use smelly lures such as chicken liver, stink bait, diced baitfish or the reliable “night crawler” earthworm, he said. Catfish tend to congregate in schools, making it easy for anglers to quickly fill up an ice chest when they find an abundant fishing hole.

“Catfish have sensory adaptations that allow them to thrive in muddy water and dark conditions,” Jones said. “The whiskers around their mouths, also known as barbels, enable catfish to find food on the bottom by their sense of touch and taste even if they cannot see the food.”

Jones said the three most popular species of catfish for Arkansas anglers are channel catfish, blue catfish and flathead catfish. Yellow and brown bullhead catfish are also abundant in ponds, backwaters and small, warm streams in Arkansas, though they are not usually sought by anglers due to their small size.

Where to catch catfish in Arkansas

“Arkansans have a lot of great options for fishing for catfish in community ponds,” Jones said. “The Arkansas Game and Fish Commission (AGFC) stocks community fishing ponds throughout the state with food-size channel catfish every year through its Family and Community Fishing Program. These ponds are often close to home and are excellent locations for kids learning to fish or for adults looking for a convenient place to relax after work.”

Jones said anglers can take home three catfish per day from these community ponds, but reminds anglers 16 years and older that they must have valid fishing licenses to fish. Information on when, where and how many fish were stocked in Arkansas ponds can be found by calling the AGFC stocking hotline at 1-866-540-FISH (3474), or online at http://www.agfc.com/fishing/Pages/FishingProgramsFCFStock.aspx .

“Nothing says ‘Southern’ like fried catfish and the best fish are caught fresh from the lake,” Jones said.

Fish frying rigs that consist of a pot, cooker, propane hose and regulator can be purchased from $50 to $100, he said. Add a filled propane tank for around $50 and about two to three gallons of high-smoke point oil such as vegetable or peanut oil for $20 to $45 and anglers can enjoy the use of a portable fish-frying machine.

Jones said necessary fish cleaning equipment depends on the intended meal and the size of fish, but a polyethylene cutting board, sharp fillet knife, electric knife, catfish skinning pliers and a large bowl for holding water and fillets should suffice.

There are many ways to clean catfish and the size of the fish matters when choosing the most efficient method, he said. Small fish, less than 10 to 12 inches in length, are very good fried whole after skinning the body and removing the head and guts.

Medium-sized fish 12 to 25 inches long should be cleaned very efficiently with an electric knife. Start by cutting behind the pectoral fin straight down to the spine. Next, turn the blade and run it along the length of the spine without cutting into it, towards the tail. About one inch before cutting through the skin at the tail, flip the fillet over with the knife so the skin lies on the cutting board and the meat is exposed. Then continue cutting away from the head, but just along the skin so that all that is left when the knife has reached the end of the fillet is a clean piece of skinless meat.

“Remember to remove the section of ribs near the head-end of the fillet and any strips of skin left on the back of the fillet,” Jones said. “Large, thick fillets will cook much better and faster if they are cut into nuggets that are no more than about an inch thick. Large fish, about 25 inches and all the way up to the giant blue and flathead catfish, are best cleaned by first skinning the body and then working out the fillets with a traditional non-electric fillet knife, much like one would use to clean a deer.”

Jones said once the fillets are removed from the fish, they should be agitated in a bowl of water to remove any remaining blood. The fillets should then be patted dry.

“Seasoning preferences vary from person to person, but a sprinkling of your favorite Cajun seasoning onto the bare fillets guarantees more flavor,” Jones said. “The fillets should then be placed in a one gallon plastic Ziploc bag filled with a mixture of equal parts corn meal and all purpose flour and shaken vigorously.”

After they are properly coated, drop a few fillets at a time into oil heated to 350 degrees. Allow the fillets to cook until they are golden brown and floating in the oil.

“Be careful not to overload the pot because the oil temperature has to recover each time a new fillet is added,” Jones said. “Lower cooking temperature and longer cooking time tends to result in mushy, less appetizing fillets.”

When the fillets are floating on the oil’s surface, remove and place them in a large pan lined with paper towels to absorb extra oil, he said. Allow a few minutes for the fillets to cool.

“Serve catfish with your favorite condiments such as ketchup, hot sauce or tartar sauce, and simply enjoy eating one of Arkansas’ staple fish,” Jones said.