By Ryan McGeeney
U of A System Division of Agriculture
Aug. 11, 2016

STUTTGART, Ark. — A home whose flagstones, wood and melting-into-the-landscape profile expresses the unique vision of architect Fay Jones, will now serve as a multi-purpose educational center and lodging for the University of Arkansas System Division of Agriculture. 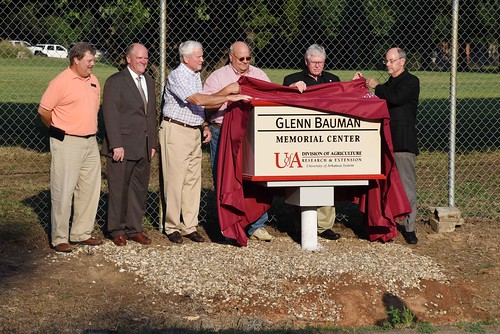 Mark Cochran, vice president for Agriculture and University of Arkansas System President Don Bobbitt held a dedication Tuesday evening for the house, a 3,000-square-foot structure built in 1976. The house was donated to the U of A by Chris Robertson, whose family owned the house and who sought to memorialize Glenn Bauman, a close family friend who served the farming community in and around Stuttgart through banking for decades. Bauman, who served as senior vice president of Farmers and Merchant Bank of Stuttgart for almost 30 years, died unexpectedly at the age of 63 in 2010.

“I knew Glenn when I was in banking many years ago,” Robertson said. “I watched Glenn over the years, and how he treated people in the community, and how he treated agriculture, and what the relationship between agriculture and the bank was. I couldn’t think of anything that would better honor Glenn and his memory than to give to agriculture something that would tie back to Glenn on a daily basis. It’s a great honor to have done that.”

Cochran, noting that the Stuttgart area is home to one of the highest concentrations of PhD rice scientists and researchers in the world, said the facility would be used to host visiting scientists from around the world, would serve as an educational center for 4-H programs and would also would provide many opportunities for Master Gardeners clubs to develop horticultural projects across the five-acre property.

“The Master Gardeners are just going to be tickled pink,” Cochran said.

Bobbitt noted the structure typified the spirit of many of Fay Jones’s creations throughout Arkansas.

“When I look at these Fay Jones homes, I’m reminded of the fact that Fay was an Arkansan,” Bobbitt said. “He eschewed any of the conventional wisdom about what architects were doing as they graduated — they were heading to big cities and building huge monuments. He believed in nature, in bringing the outside in as unobtrusively as possible, and I think this house nicely reflects it.

“He preferred the rural quiet of Arkansas to the urban landscape,” Bobbitt said. “I think that sums up beautifully what he’s done in this house.”

For more information about the programs of the University of Arkansas System Division of Agriculture, contact your county extension office or visit www.uaex.uada.edu.