Arkansas rice could wind up on dinner plates in China

STUTTGART, Ark. – China, the world’s largest rice grower, may soon become a customer of the largest rice producer in the United States, according to a panelist exploring the future of Arkansas rice at the sixth annual Arkansas Rice Expo.

More than 1,000 people attended the 2016 Arkansas Rice Expo, a half-day celebration of the rice industry that included field tours at the Rice Research and Extension Center, cooking demonstrations, and seminars. 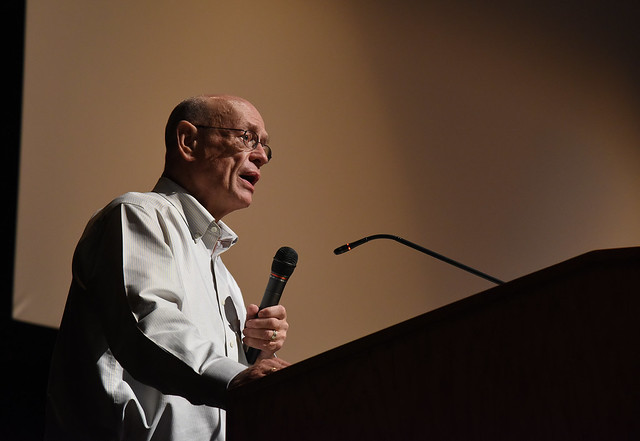 Keith Glover, chief executive officer of Producers Rice Mill; Eric Wailes, professor-ag economics with the University of Arkansas System Division of Agriculture and Paul Bolin of Anheuser-Busch InBev, were members of the keynote panel pondering the question: “Where will we sell Arkansas rice in 2025?”

Mark Cochran, vice president-agriculture and head of the University of Arkansas System Division of Agriculture, said the question was a serious one.

“We really want to be able to have a rice industry within the state of somewhere around 1.5 million acres, and it’s a big job to figure out where we’re going to sell all the rice that we’d like to produce here.”

“I’m very optimistic about selling rice into China, hopefully soon, definitely before 2025,” Glover said. “I didn’t believe it for the longest time, but it changed for me in November 2011, when two Chinese rice buyers came to our office.”

They key to the Chinese market is the trust the Chinese place in America’s food safety system.

“They have a huge, growing middle class, bigger than the entire U.S. populace,” Glover said. “They’re very concerned about the safety of the rice and food products grown in China.”

The only barrier to selling Arkansas rice to China is a phytosanitary agreement, that Glover said has been in the works for 10 years.

Wailes said there were three key trends to watch.

“The first concerns trade policy. Rice is one of the most historic commodities in world trade, and there’s no indication that that’s going to let up,” he said.

“I think climate change is also going to have a potentially huge impact on where rice is produced in the future, particularly with rising sea levels — this could have a significant impact in Southeast Asia,” Wailes said. “Competitors like Vietnam, import markets like Bangladesh, are likely to be significantly affected.”

The last trend, he said, was economic growth and where it was growing.

“Certainly, the one area of the world where we see a big growth potential for rice consumption is sub-Saharan Africa,” Wailes said. “We’re not really competitive there, but it’s an area that’s going to expand the world rice trade, and will take more of the Asian pressure off markets we are in.”

Stanley Harrison, who farms about 800 acres of rice and soybeans near Wynne, comes to the rice expo every year, as well as the field days at the Division of Agriculture’s Pine Tree Station closer to his home.

“I like that the division isn't trying to sell me anything,” Harrison said. “The information is unbiased and I've used it as long as I've been farming.

“I recognize the dedication of the people who work for the division,” he said. “We appreciated it as growers.”

To learn more about rice production in Arkansas, contact your county extension office or visit www.uaex.uada.edu.