By Ryan McGeeney
U of A System Division of Agriculture
April 22, 2016

LITTLE ROCK — As Arkansas growers continue through the planting season, heavy and intermittent rainfall is forcing a number of corn growers throughout the state to take a half-step backwards and replant portions of their acreage. 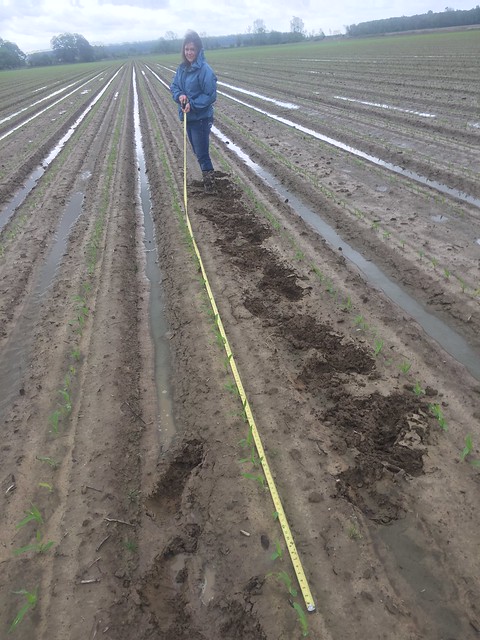 As of April 17, growers throughout the state had planted 81 percent of the approximately 790,000 acres of corn projected to be planted in Arkansas in 2016, according to a weekly U.S. Department of Agriculture report published Monday. But due to several isolated heavy rain events, some growers in eastern and northeastern Arkansas will likely replant 5-10 percent of fields, Jason Kelley, extension wheat and feed grains agronomist for the University of Arkansas System Division of Agriculture said.

“It’s a state-wide problem,” Kelley said. “I think we’ve replanted more than what we have in the last couple of years.”

Kelley said heavy rains can dissolve raised seed bed most growers use for rice, and intense sunshine can bake the soil to a hard crust, making it difficult for germinated corn seed to penetrate and surface. Soil temperatures cooler than 55 degrees can also slow the germination process itself. In some cases, he said, later rains may help to soften the soil, but corn may still have trouble emerging to form adequate plant stands.

The combination of weather factors can also lead to “rootless corn syndrome,” in which the plant’s nodal root system, also known as the anchor root, fails to gain purchase, and ends up developing above the soil. Without the anchor root, the plant will typically fall over and die, Kelley said.

Andy Vangilder, Clay County Cooperative Extension Agent, estimated that 25,000-30,000 acres of corn will be planted in his county this year, and that growers were replanting about 500-700 acres of that.  Much of the replanting being done was “spot planting,” as opposed to replacing entire fields. Much of the larger replanting efforts were taking place at the “bottom end” of fields, which tend to saturate soils more quickly and extensively than the upper ends. This can lead to its own challenges, he said.

“There ends up being a maturity difference when you’re trying to harvest in the fall, because that bottom end’s probably going to be not quite ready,” Vangilder said. “So you end up either taking a discount on that grain, or you wait on the whole thing. So it’s aggravating when you have a spot-planting situation going on.”

Kelley said growers may face a difficult choice when individual fields have only partial plant loss. He said fields typically need to have a minimum of 25,000 plants per acre to achieve good yields.

“A lot of times, it won’t be a complete failure,” he said. “You won’t have enough of a plant stand to maximize yield, but you’ve still got some out there.”

When growers replant, there is also the question of what to do about the seeds already in the ground — which, although they won’t come to fruition, represent a competitor for nutrients and water. Kelley recommended using tillage to plow the seeds under, along with a non-specific, pre-emergence herbicide such as Gramoxone to kill surviving seeds from the first planting.

“In a replant situation, those remaining plants from the first planting are weeds,” Kelley said. “So, you have two options: you can do tillage — and that’s what a lot of producers are doing; planting on raised beds, and the beds have melted down with all the heavy rain. So they need a good bed to get the water down for furrow irrigation.”

Kelley said that if growers replant in April, they will probably avoid yield losses. If replanting is delayed until May, however, yields may start to decline.

Kelley said most seed companies will supply growers with seed for replant at a discount, usually charging only 25-50 percent of the original price, depending on the company.

“Either way, they’re going to have some expense,” he said. “Time and labor is still going to be a factor.”