By The U of A System Division of Agriculture

(Newsrooms: with file art of mosquito larva at www.flickr.com/photos/uacescomm/14337013791)

FAYETTEVILLE, Ark. – If Zika-carrying insects were in the United States, the mosquitoes that are associated with the virus don’t breed in rice fields, swamps or flood waters. They breed closer to home, preferring bird baths, tires and other containers associated with people and their dwellings, said Kelly Loftin, extension entomologist for the University of Arkansas System Division of Agriculture. 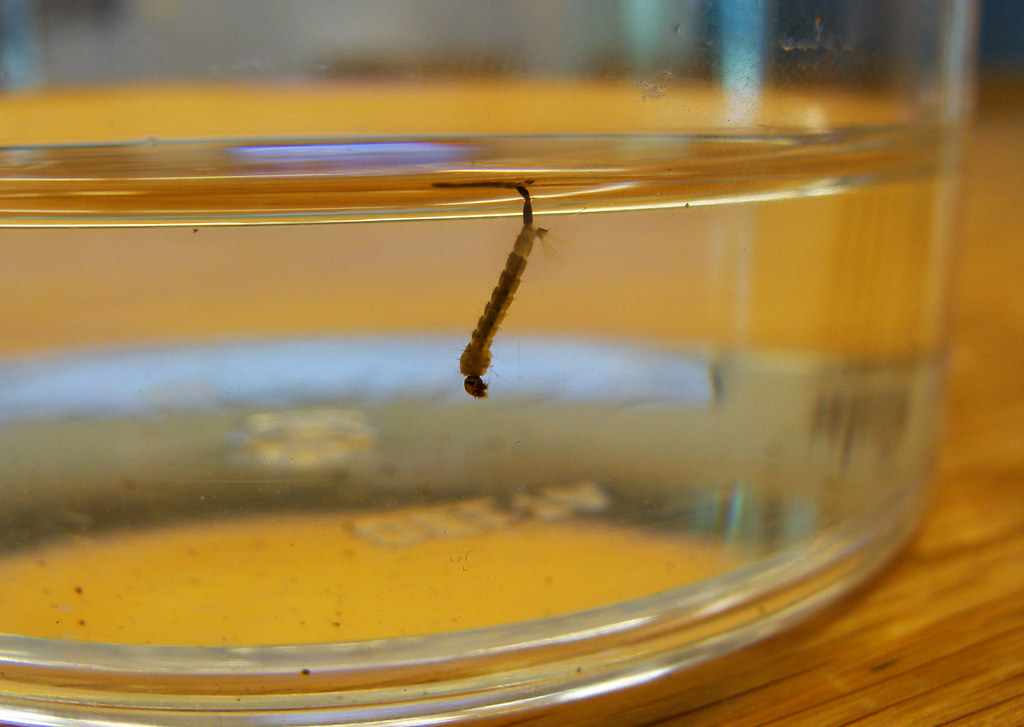 WIGGLER -- Mosquito larvae. A week of rain and warm weather has encouraged mosquito population growth in Arkansas. Taken June 3, 2014. (U of Arkansas System Division of Agriculture photo by Mary Hightower)

However, there have been no instances of people acquiring the disease through mosquitoes in the United States, according to the federal Centers for Disease Control and Prevention. All reported cases to date involve acquiring the Zika out of the U.S., and being diagnosed upon return. (see: http://www.cdc.gov/mmwr/zika_reports.html )

There is concern that the virus may become established in the United States.

“It’s important to learn to minimize mosquito bites and the risk of any mosquito-transmitted disease,” Loftin said.

There are two potential mosquito vectors of the Zika virus, the Asian tiger mosquito or Aedes albopictus; and Aedes aegypti.

“These two mosquitoes breed in artificial containers more closely associated with people and their dwellings,” said Loftin. “Unlike mosquitoes commonly found in rice fields which are active at night, Aedes aegypti and Aedes albopictus are active during the day.”

Although both mosquitoes may be present in Arkansas, “for mosquito-borne Zika transmission to occur, potential mosquito vectors and Zika infected individuals must be simultaneously present,” he said. So, the proportion of potentially virus infected mosquito vectors would be small.”

The CDC said that only 4 percent of people traveling to Zika infected areas tested positive for the virus. In an April 15 report only about 182 of 4,534 tested from January to March of this year were positive for Zika (MMWR April 15, 2016, http://www.cdc.gov/mmwr/index.html).

The two mosquitoes prefer to breed in “small containers holding stagnant water such as bird baths, old tires, catch basins under potted plants, and rain gutters that hold water,” Loftin said.   “Breeding source elimination around the home can be very effective, especially when you consider that these mosquitoes have relatively short flight ranges – a quarter to a half mile.

“Rid your yard of containers that hold water,” he said. “Flush bird baths daily and don’t forget to check and fix rain gutters so water doesn’t stand in them.  All sources of standing water should be eliminated.”

Loftin also said that “the first line of defense against mosquito bites are insect repellents. Those containing DEET are effective at repelling mosquitoes.”

Wearing a long-sleeved shirt and long pants will also reduce exposure to mosquito bites.  Gear and clothing can also be treated with clothing repellents that contain permethrin. Look for these repellent names in various products and follow the use label.

While many consider rice fields to be a breeding ground for mosquitoes, not all mosquitoes are attracted to those areas.

Jarrod Hardke, extension rice agronomist with the University of Arkansas System Division of Agriculture, said “there are more than thirty species of mosquitoes common to the state of Arkansas.  However, the main species found in Arkansas rice fields are Anopheles quadrimaculatus and Psorophora columbiae.

“You won’t find the mosquitoes that could transmit Zika virus out in the rice fields, since they don’t develop in grassland or riceland pools, only in containers,” he said.

Loftin recommends using specific insecticides around the home to minimize the presence of mosquitoes that live where people do. In addition to protective clothing and personal repellents, fogging outdoor areas can be very effective.

“Fogging should be used only when mosquitoes are most active because they only last two to three hours,” he said. “Treating areas such as shrubbery can be particularly helpful in controlling resting mosquitoes.”