By Dave Edmark
U of A System Division of Agriculture
April 8, 2016

•  The product looks like ice cream, but is a lower-calorie dessert
•  The dessert’s base is the edamame soybean
•  A patent has been issued and a licensee is being sought

FAYETTEVILLE, Ark. – I scream, you scream, we all scream for … soybeans?

A frozen dessert made with soybeans and sometimes colored with spinach has gained enthusiastic reviews from taste testers and could become a favorite for parents locked in the eternal struggle to get finicky kids to eat their vegetables. 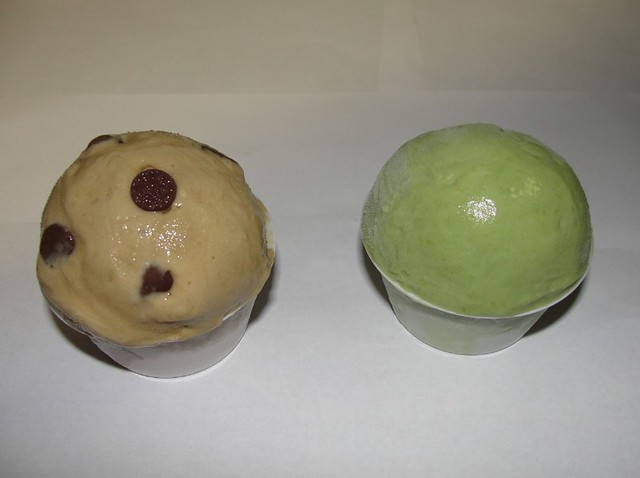 It’s a dessert that looks a lot like ice cream but isn’t, because it doesn’t contain any dairy. Instead, it has edamame, the soybean that’s been gaining fans as a healthy snack. The dessert has also been made without the spinach for a chocolate chip mocha version.

“The healthy image of ice cream can be enhanced by incorporating suitable vegetables, fruits or a combination of both with edamame,” said Navam Hettiarachchy, University professor of food science in the University of Arkansas System Division of Agriculture, who developed the formula. “To get the creamy texture and taste, the edamame needs to be processed into a fine emulsion. The technology provides a fine texture, creamy mouth feel and taste without the inherent ‘beany’ flavor.”

The Division of Agriculture recently received a patent for the product and is seeking to license it to a commercial vendor. The Arkansas Soybean Promotion Board partly funded Hettiarachchy’s development of the product.

“We’re hoping to attract support that will allow us to develop other flavors popular with consumer that include combinations of fruits, vegetables, herbs and spices,” Hettiarachchy said. “We also want to develop a unique trendy blend that combines spicy hotness and tart sweetness.”

Its nutritional numbers come out well. A 78-gram serving contains 117.1 calories, with only 27.5 of those being fat calories. A similar size serving of conventional vanilla ice cream has at least 145 calories.

Hettiarachchy has offered the frozen dessert to visiting groups for sampling and has received favorable feedback. In 2013 she provided about 100 servings to physicians and nurses attending participants at a symposium on obesity in Arkansas. “They tasted the product and said they loved it,” she said. Comments from the tasters included “awesome,” “very tasty” and “will buy if available in a store.”

Hettiarachchy hopes that potential licensees for the patent will recognize the frozen dessert as a way to reduce obesity. “It can be used as a dessert for the school lunch program,” she said. “It’s also for people who enjoy sugar and it can have different flavors.”

The University of Arkansas System Division of Agriculture offers all its Extension and Research programs to all eligible persons regardless of race, color, sex, gender identity, sexual orientation, national origin, religion, age, disability, marital or veteran status, genetic information, or any other legally protected status, and is an Affirmative Action/Equal Opportunity Employer.