Another good year for fall webworms
skip to main content
2015

Another good year for fall webworms

“You’ve probably noticed the webs. There aren’t many persimmon, hickory, or walnut trees without them,” said Neal Mays, Benton County extension agent for the University of Arkansas System Division of Agriculture. “Fall webworms have the tenacity of an Olympic athlete and the appetite of a teenager, and a good number of infested trees contain more web than leaves this year. 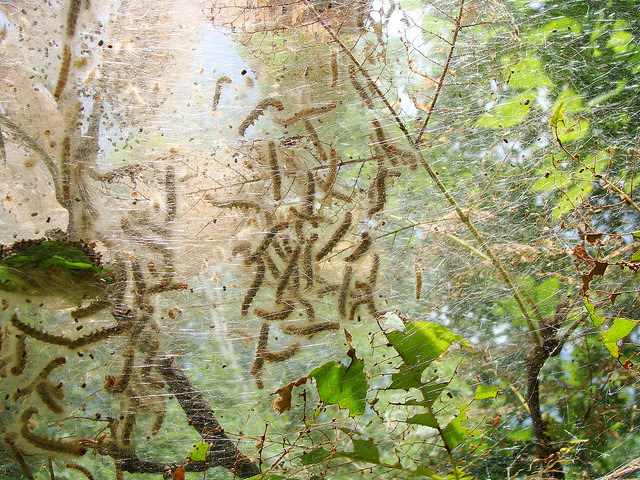 WEB WORMS -- Fall Webworms are a common sight in Arkansas during the late summer and early autumn. Thought they do eat leaves, they don't kill trees. (U of Arkansas System Division of Agriculture photo by Mary Hightower.)

“The good news is these caterpillars don’t kill trees, but they can sure make trees look bad,” he said.

Female moths lay eggs on the leaves, and after hatching, small caterpillars feed on the leaf surface. As they grow, larger caterpillars will eat the entire leaf. Once all leaves in the web have been consumed the worms move up or down the limb, spin more web, and continue feeding for up to five weeks. Only this year’s leaves are consumed and the limbs and buds inside are unharmed. Multiple generations are common in the same year. Population size is cyclical, and worm numbers usually decline after two or three years of heavy infestation.

If control is desired, webs and worms can be cleared from tree limbs or affected limbs can be pruned and destroyed.

“However, pruning may damage the shape and appearance of small trees, or be impossible if webs are in upper branches of large trees,” Mays said. “Chemical control measures include use of bifenthrin or Sevin. A “natural” product that may provide control is Bt, which stands for a bacterium, Bacillus thuringiensis. However application of all these protectants may be difficult or impossible in large trees. Always apply pesticides according to label instructions.”