MONTICELLO, Ark. — For more than a year, researchers have been grappling with the Emerald Ash Borer, an invasive species of beetle that has migrated through the Midwest and southern United States since it was first detected in Michigan in 2002, spreading to at least 25 states.

Forest health experts with the University of Arkansas System Division of Agriculture’s Arkansas Forest Resource Center have been attacking the problem from multiple angles, including trying to identify the window of time during which the adult insects will emerge from pupal chambers in affected trees and take flight. 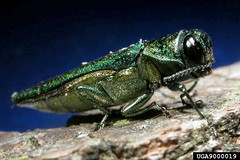 Mohammad Bataineh, assistant professor of forest health at the University of Arkansas at Monticello and Arkansas Forest Resource Center, has been leading the research effort to hone in on that window.

“We’ve been focusing on adult emergence, when adults come out of infested logs or trees, and how long that duration lasts in Arkansas,” Bataineh said. “We’re interested in that for the practical purpose of determining safe time windows for insect control and the transportation of wood,” Bataineh said.

About 55 percent of Arkansas is forested, with more than half of that land (58 percent) belonging to private individuals or enterprises. In 2011, the timber industry accounted for more than 64,000 jobs in Arkansas, with a labor income of about $3.6 billion.

The emerald ash borer’s presence has been confirmed in 10 counties in the state, including Saline, Hot Spring, Clark, Dallas, Ouachita, Columbia, Union, Calhoun, Nevada and Bradley counties. Soo-Hoon “Sam” Kim, state survey coordinator for the Arkansas State Plant Board, said the emerald ash borer was first detected in Nevada and Clark counties in July 2014. Population levels have since reached detection levels in additional counties during the ensuing year.

According to research Bataineh and his team are currently documenting for publication, early emergence of the emerald ash borer adult begins around April 20, and peaks around May 3.

Knowing the emergence window can help develop better approaches to tracking the insect’s spread, Bataineh said, but it can also help boost efforts to contain the species in Arkansas by highlighting when it might be most vulnerable.

“There is no eradication strategy,” Kim said. “There’s no way to eradicate this pest, because of where it lives: its habitat is in the forest, and you can’t really do massive treatments in the forest. But there are ways of controlling it.”

One of the wasp varieties has already been released in Clark, Ouachita and Columbia counties. The other two varieties will be released in the spring.

Kim said homeowners who identify emerald ash borers in ash trees on their own property have several options available to them to treat infestations. Signs of infestation include:

For more information about the emerald ash borer, visit www.emeraldashborer.info or www.arinvasives.org. A fact sheet about the borer may be found at: “Emerald Ash Borer: A potential pest of ash trees in Arkansas”, downloadable at www.uaex.uada.edu/publications/pdf/FSA-7066.pdf. To learn more about treatment options for homeowners who suspect they may have an emerald ash borer infestation, contact your local county extension agent, or visit www.uaex.uada.edu.